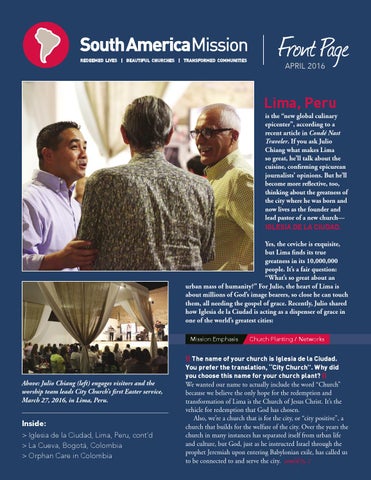 Lima, Peru is the “new global culinary epicenter”, according to a recent article in Condé Nast Traveler. If you ask Julio Chiang what makes Lima so great, he’ll talk about the cuisine, confirming epicurean journalists’ opinions. But he’ll become more reflective, too, thinking about the greatness of the city where he was born and now lives as the founder and lead pastor of a new church—

IGLESIA DE LA CIUDAD. Yes, the ceviche is exquisite, but Lima finds its true greatness in its 10,000,000 people. It’s a fair question: “What’s so great about an urban mass of humanity?” For Julio, the heart of Lima is about millions of God’s image bearers, so close he can touch them, all needing the gospel of grace. Recently, Julio shared how Iglesia de la Ciudad is acting as a dispenser of grace in one of the world’s greatest cities: Mission Emphasis

|| The name of your church is Iglesia de la Ciudad. You prefer the translation, “City Church”. Why did you choose this name for your church plant? || We wanted our name to actually include the word “Church” because we believe the only hope for the redemption and transformation of Lima is the Church of Jesus Christ. It’s the vehicle for redemption that God has chosen. Also, we’re a church that is for the city, or “city positive”, a church that builds for the welfare of the city. Over the years the church in many instances has separated itself from urban life and culture, but God, just as he instructed Israel through the prophet Jeremiah upon entering Babylonian exile, has called us to be connected to and serve the city. cont’d Page 2 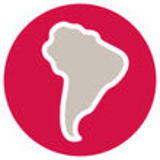