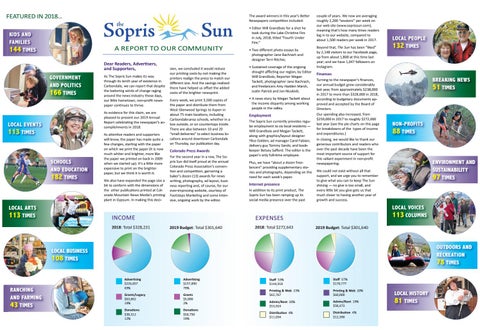 The award winners in this year's Better Newspapers competition included:

A REPORT TO OUR COMMUNITY GOVERNMENT AND POLITICS 166 TIMES

As The Sopris Sun makes its way through its tenth year of existence in Carbondale, we can report that despite the battering winds of change raging around the news industry these days, our little hometown, non-proﬁt newspaper continues to thrive.

As evidence for this claim, we are pleased to present our 2019 Annual Report celebrating the newspaper's accomplishments in 2018.

As attentive readers and supporters will know, the paper has made quite a few changes, starting with the paper on which we print the paper (it is now much whiter and brighter, more like the paper we printed on back in 2009 when we started up). It's a little more expensive to print on the brighter paper, but we think it is worth it.

We also have expanded the page size a bit to conform with the dimensions of the other publications printed at Colorado Mountain News Media's printing plant in Gypsum. In making this deci-

sion, we concluded it would reduce our printing costs by not making the printers realign the press to match our diﬀerent size. And the savings realized there have helped us oﬀset the added costs of the brighter newsprint.

Every week, we print 3,500 copies of the paper and distribute them from West Glenwood Springs to Aspen in about 75 main locations, including Carbondale-area schools, whether in a box outside, or on countertops inside. There are also between 10 and 20 “small deliveries” to select business locations around downtown Carbondale on Thursday, our publication day.

For the second year in a row, The Sopris Sun did itself proud at the annual Colorado Press Association's convention and competition, garnering a baker's dozen (13) awards for news writing, photography, ad layout, business reporting and, of course, for our ever-improving website, courtesy of Footsteps Marketing and some intensive, ongoing work by the editor.

• Editor Will Grandbois for a shot he took during the Lake Christine Fire in July, 2018, titled “Fourth Under Fire;”

• A news story by Megan Tackett about the income disparity among working people in the valley.

Plus, we have “about a dozen freelancers” providing supplementary stories and photographs, depending on the need for each week's paper.

In addition to its print product, The Sopris Sun has been ramping up its social media presence over the past

couple of years. We now are averaging roughly 2,200 “sessions” per week on our web site (www.soprissun.com), meaning that's how many times readers log in to our website, compared to about 1,500 readers per week in 2017.

Turning to the newspaper's ﬁnances, our annual budget grew considerably last year, from approximately $238,000 in 2017 to more than $328,000 in 2018, according to budgetary documents approved and accepted by the Board of Directors. Our spending also increased, from $259,000 in 2017 to roughly $272,000 last year (see the pie charts on this page for breakdowns of the types of income and expenditures.) In closing, we would like to thank our generous contributors and readers who over the past decade have been the most important source of support for this valiant experiment in non-proﬁt newspapering.

We could not exist without all that support, and we urge you to remember to give what you can to keep The Sun shining — no give is too small, and every little bit you give gets us that much closer to having another year of growth and success. 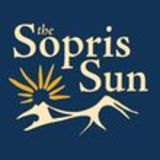