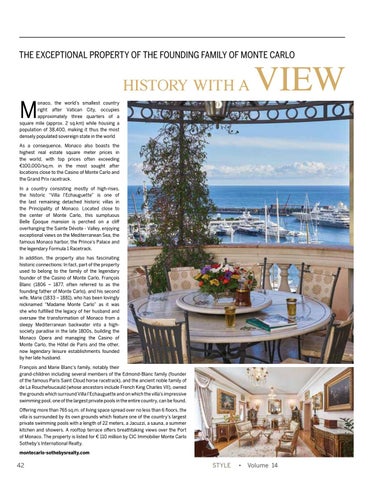 THE EXCEPTIONAL PROPERTY OF THE FOUNDING FAMILY OF MONTE CARLO

onaco, the world’s smallest country right after Vatican City, occupies approximately three quarters of a square mile (approx. 2 sq.km) while housing a population of 38,400, making it thus the most densely populated sovereign state in the world As a consequence, Monaco also boasts the highest real estate square meter prices in the world, with top prices often exceeding €100,000/sq.m. in the most sought after locations close to the Casino of Monte Carlo and the Grand Prix racetrack. In a country consisting mostly of high-rises, the historic “Villa l’Echauguette” is one of the last remaining detached historic villas in the Principality of Monaco. Located close to the center of Monte Carlo, this sumptuous Belle Époque mansion is perched on a cliff overhanging the Sainte Dévote - Valley, enjoying exceptional views on the Mediterranean Sea, the famous Monaco harbor, the Prince’s Palace and the legendary Formula 1 Racetrack. In addition, the property also has fascinating historic connections: In fact, part of the property used to belong to the family of the legendary founder of the Casino of Monte Carlo, François Blanc (1806 – 1877, often referred to as the founding father of Monte Carlo), and his second wife, Marie (1833 – 1881), who has been lovingly nicknamed “Madame Monte Carlo” as it was she who fulfilled the legacy of her husband and oversaw the transformation of Monaco from a sleepy Mediterranean backwater into a highsociety paradise in the late 1800s, building the Monaco Opera and managing the Casino of Monte Carlo, the Hôtel de Paris and the other, now legendary leisure establishments founded by her late husband. François and Marie Blanc’s family, notably their grand-children including several members of the Edmond-Blanc family (founder of the famous Paris Saint Cloud horse racetrack), and the ancient noble family of de La Rouchefoucauld (whose ancestors include French King Charles VII), owned the grounds which surround Villa l’Echauguette and on which the villa’s impressive swimming pool, one of the largest private pools in the entire country, can be found. Offering more than 765 sq.m. of living space spread over no less than 6 floors, the villa is surrounded by its own grounds which feature one of the country’s largest private swimming pools with a length of 22 meters, a Jacuzzi, a sauna, a summer kitchen and showers. A rooftop terrace offers breathtaking views over the Port of Monaco. The property is listed for € 110 million by CIC Immobilier Monte Carlo Sotheby’s International Realty. montecarlo-sothebysrealty.com 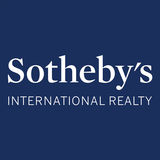