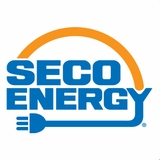 SECO Energy is a not-for-profit electric cooperative serving more than 200,000 consumers across the Florida counties of Sumter, Citrus, Marion, Lake, Levy, Pasco and Hernando. J.D. Power ranked SECO Energy highest in customer satisfaction among cooperatives nationwide in 2017 and 2016 and ranked it highest in customer satisfaction among midsize utilities in the south in 2015. SECO's wholesale power provider is Seminole Electric, one of the largest generation and transmission cooperatives in the nation, serving 1.8 million consumers in Florida. Seminole is owned by nine electric distribution cooperatives, and SECO is one of those nine member-owners. SECO’s 2021 ACSI score is 91 – earning the co-op one of the highest satisfaction ratings in the state.