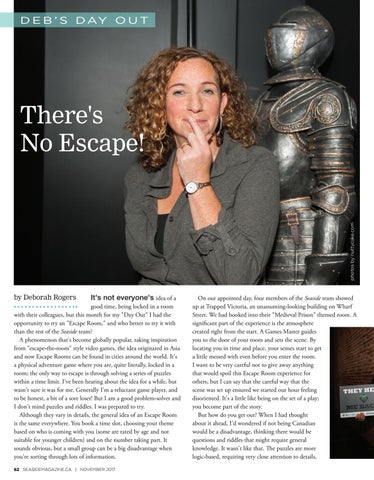 It's not everyone's idea of a good time, being locked in a room with their colleagues, but this month for my "Day Out" I had the opportunity to try an "Escape Room," and who better to try it with than the rest of the Seaside team? A phenomenon that's become globally popular, taking inspiration from "escape-the-room" style video games, the idea originated in Asia and now Escape Rooms can be found in cities around the world. It's a physical adventure game where you are, quite literally, locked in a room; the only way to escape is through solving a series of puzzles within a time limit. I've been hearing about the idea for a while, but wasn't sure it was for me. Generally I'm a reluctant game player, and to be honest, a bit of a sore loser! But I am a good problem-solver and I don't mind puzzles and riddles. I was prepared to try. Although they vary in details, the general idea of an Escape Room is the same everywhere. You book a time slot, choosing your theme based on who is coming with you (some are rated by age and not suitable for younger children) and on the number taking part. It sounds obvious, but a small group can be a big disadvantage when you're sorting through lots of information. by Deborah Rogers

On our appointed day, four members of the Seaside team showed up at Trapped Victoria, an unassuming-looking building on Wharf Street. We had booked into their "Medieval Prison" themed room. A significant part of the experience is the atmosphere created right from the start. A Games Master guides you to the door of your room and sets the scene. By locating you in time and place, your senses start to get a little messed with even before you enter the room. I want to be very careful not to give away anything that would spoil this Escape Room experience for others, but I can say that the careful way that the scene was set up ensured we started our hour feeling disoriented. It's a little like being on the set of a play; you become part of theÂ story. But how do you get out? When I had thought about it ahead, I'd wondered if not being Canadian would be a disadvantage, thinking there would be questions and riddles that might require general knowledge. It wasn't like that. The puzzles are more logic-based, requiring very close attention to details,