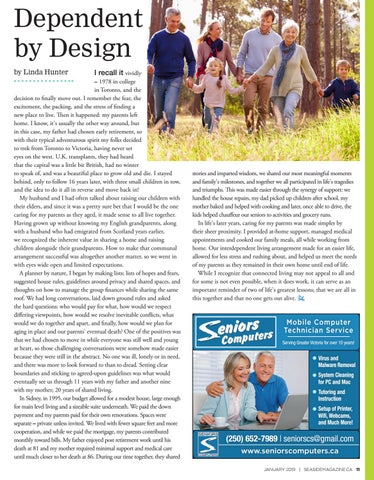 Dependent by Design by Linda Hunter

I recall it vividly – 1978 in college in Toronto, and the decision to finally move out. I remember the fear, the excitement, the packing, and the stress of finding a new place to live. Then it happened: my parents left home. I know, it's usually the other way around, but in this case, my father had chosen early retirement, so with their typical adventurous spirit my folks decided to trek from Toronto to Victoria, having never set eyes on the west. U.K. transplants, they had heard that the capital was a little bit British, had no winter to speak of, and was a beautiful place to grow old and die. I stayed behind, only to follow 16 years later, with three small children in tow, and the idea to do it all in reverse and move back in! My husband and I had often talked about raising our children with their elders, and since it was a pretty sure bet that I would be the one caring for my parents as they aged, it made sense to all live together. Having grown up without knowing my English grandparents, along with a husband who had emigrated from Scotland years earlier, we recognized the inherent value in sharing a home and raising children alongside their grandparents. How to make that communal arrangement successful was altogether another matter, so we went in with eyes wide open and limited expectations. A planner by nature, I began by making lists; lists of hopes and fears, suggested house rules, guidelines around privacy and shared spaces, and thoughts on how to manage the group finances while sharing the same roof. We had long conversations, laid down ground rules and asked the hard questions: who would pay for what, how would we respect differing viewpoints, how would we resolve inevitable conflicts, what would we do together and apart, and finally, how would we plan for aging in place and our parents' eventual death? One of the positives was that we had chosen to move in while everyone was still well and young at heart, so those challenging conversations were somehow made easier because they were still in the abstract. No one was ill, lonely or in need, and there was more to look forward to than to dread. Setting clear boundaries and sticking to agreed-upon guidelines was what would eventually see us through 11 years with my father and another nine with my mother; 20 years of shared living. In Sidney, in 1995, our budget allowed for a modest house, large enough for main level living and a sizeable suite underneath. We paid the down payment and my parents paid for their own renovations. Spaces were separate – private unless invited. We lived with fewer square feet and more cooperation, and while we paid the mortgage, my parents contributed monthly toward bills. My father enjoyed post retirement work until his death at 81 and my mother required minimal support and medical care until much closer to her death at 86. During our time together, they shared

stories and imparted wisdom, we shared our most meaningful moments and family's milestones, and together we all participated in life's tragedies and triumphs. This was made easier through the synergy of support: we handled the house repairs, my dad picked up children after school, my mother baked and helped with cooking and later, once able to drive, the kids helped chauffeur our seniors to activities and grocery runs. In life's later years, caring for my parents was made simpler by their sheer proximity. I provided at-home support, managed medical appointments and cooked our family meals, all while working from home. Our interdependent living arrangement made for an easier life, allowed for less stress and rushing about, and helped us meet the needs of my parents as they remained in their own home until end of life. While I recognize that connected living may not appeal to all and for some is not even possible, when it does work, it can serve as an important reminder of two of life's greatest lessons; that we are all in this together and that no one gets out alive.

• Virus and Malware Removal • System Cleaning for PC and Mac • Tutoring and Instruction • Setup of Printer, Wifi, Webcams, and Much More!