Philip Braham: In Time and Silently 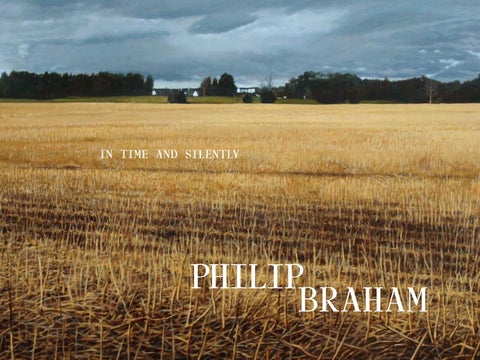 ‘ E nergy, At play But for In time

balance, outbreak for their own sake now we foot it lightly and silently.’

welve days before his death, Seamus Heaney wrote the the care and attention I give to the process of representation poem In Time for his granddaughter Síofra. It speaks is like an act of love or devotion, both to the natural scene of her life force as a palpable energy that will outlive his. witnessed in time, and to the realisation of the painting over From her toddler wobbles to the surefooted steps of woman- time. So, far from being melancholic, these are affirmative hood he presents her as like an oratorio: energy, balance, out- paintings that occupy the spaces exposed by absence. Their break. It reprises themes of family as a lineage of Being, and transcendental qualities are otherworldly only to the extent of comportment that both inherits values passed down and of creating a painting that goes beyond its material properyet whose individuality and energy bids Heaney himself to ties to open onto a vista that is complete in itself: a world beside our world. The phenomenologist keep in step. Life is portrayed as a dance that “for now we foot lightly”, but the The subjects are acutely Merleau-Ponty puts it this way: “The painter’s world is the visible world, proximity of death foreshadows his and observed moments in nothing but the visible: a world almost our time silently. mad, because it is complete though only The themes that preoccupied nature that have arrested Heaney are similar to those that have me from everyday life and partial. Painting awakens and carries to its highest pitch a delirium which is concerned me in the last ten years or so caused me to reflect on since the death of my father. My painthe myriad small wonders vision itself, for to see is to have at a distance; painting extends this strange tings might be described as eschatolothat spontaneously arise possession to all aspects of Being, which gical in that they concern themselves somehow become visible in order to enter with last things: they are narratives at and collapse around us into the work of art.” the horizons of death, but without the continuously. mystical preoccupations that underpin And how many of us have not yet eschatology as metaphysics. Instead, they are very much ‘of been undone by death? It is a universal aspect of Being that this world’. The subjects are acutely observed moments in na- each of us comes to know in time, but the temporality of ture that have arrested me from everyday life and caused me our existence gives life an ecstatic significance that is pure to reflect on the myriad of small wonders that spontaneously joy and lightness of being, and these are the moments I seek arise and collapse around us continuously: light on blades of to translate into paint. The landscapes I depict are familiar grass or leaves, blown clouds and shifting shadows, divots of ones, often of the fields, woods, sea and shore near to my home ploughed earth or breaking waves and surf. That life goes on at Silverknowes in northwest Edinburgh, or the landscapes unfettered by death or loss is a triumph to be celebrated, and of Fife and Perthshire as I travel to my teaching job at the

college of art in Dundee, or perhaps of the Cairngorms or took her life by walking into the sea was absent from the other ranges explored while on holiday. They invoke personal photograph. The absence of the figure comes to stand for nonexistence itself, but the presence of the painting as a whole memories or recall earlier themes in my work. One example is the painting titled Still Water (2017) and complete vision supersedes that void as an affirmation which recollects High Summer (Remembering Ophelia) made of the unchangeable and seemingly infinite world reprein 2013. It depicts the same stretch of the Water of Leith, but sented as sea, sky, wind and light. this time in autumn. Islands of foam created by decaying or- Several paintings take notions of â&amp;#x20AC;&amp;#x2DC;the voidâ&amp;#x20AC;&amp;#x2122; as their ganic matter float in constellations across the dark surface, subject: Into the Void and Pilgrims of the Void, but also Nightfall their flashes of light echoing those in the foliage above, on Mt. Hermon, Falling Angel and Sentinel all seem similarly while the golden iridescence of the sunlit leaves is reflected emergent and insubstantial. Weather conditions obscure clear in the foreground. The Ophelia series paid homage to John vision in these works, giving the image the quality of an evapoEverett Millais for his attention to the details of lived expe- rating dream, more felt than seen. Mount Hermon borders rience as much as to the narrative of the Syria and Lebanon to one side, and the Israeli departing Ophelia. But the figure of Ophelia My paintings may occupied Golan Heights to the other. Legend was not present in either of the two pain- be described as tells that Mt. Hermon was the gate of the tings: she is evoked in the title of the fallen angels and in this region of religious eschatological in first, but exists only in my mind as assodivision missiles now rain from either side that they concern ciated to the second. But is that not how the like falling angels of destruction. The void departed are experienced in time, only as themselves with is an abyss of uncertainty, living with an ima fugitive memory? last things. manent threat of death. We might say that we all live close to this abyss, but those in Tidal Swell, Firth of Forth operates in a similar way. Firstly, the dark sky and stormy sea recalls war-torn regions feel it viscerally, every moment of every day. the Romantic masterpiece Monk by the Sea (1810) by Caspar In Scotland we might be surprised to experience the sonic David Friedrich. But it also refers to a photograph titled boom of a fighter-jet on military exercise as we enjoy the gentle Tidal Swell, Monifieth, one of a series I produced in 2009 col- pleasure of walking in the hills and valleys of the Highlands, lectively titled Suicide Notes that recorded sites of suicide but that same sound will cause mortal terror in other regions incidents across Scotland that year. The figure of the monk where the jets are deployed for real. 21st Century Sublime, contemplating the vastness of nature in the Friedrich pain- Storm Clouds Over Stanley and Weathering Skies, Stanley reflect ting is absent here, just as the figure of the woman who on this predatory presence in our skies.

Is there not something chillingly beautiful about the grace spectre of Ben Macdui reports that several witnesses went and power of these machines of destruction? We live under mad with fear and threw themselves from the mountain to their protective shadow, getting-on with our peaceful lives as escape the ghost of their own presence. Viewers who stand if it were not there. Living-on is the recurring theme under- before Spectral Vision on High Ground are invited to see themselves as the shadow encircled in the painting. pinning all of these paintings. Paintings, if cared for, will last for hundreds Time is considered through the Paintings are of years, so many generations may potentially cyclical rotations of the seasons in works respositories of stand before the image and see the shadow of like Vernal Equinox, Moonrise and Morning meanings that we their own death in it. of the Autumn Equinox in which a golden come to impose Or will they? For all that I have written in tree sheds its leaves to form a perfect this text, outlining the intentions I had in circle at its base. The view across the upon them and they creating these paintings, the fact is that a fields towards Cramond in the former escape reification painting is autonomous and enters the world is depicted again in three paintings of at every turn. unadorned, its meaning pliable and open to the rapeseed crop observed first in March They do not speak interpretation. For paintings are presented as the green shoots appear, then in May to us for language as complete worlds in our own time that is an as vibrant yellow bloom, and finally after unfolding present, not one rooted to a past. the harvest in August when the stalks is too concrete. We see the work within the frame of our own have turned tawny-gold. In the last of these, the upper half of the painting is picturesque and idyllic, here and now, and make of it what we will. In that sense but the foreground shows the writhing tangle of jagged cropped paintings are repositories for meanings that we come to stalks up-close. Disquiet persists in these innocent paintings impose upon them and they escape reification at every turn. They do not speak to us, for language is too concrete. Rather, from nature too. Spectral Vision on High Ground is a painting of the phe- they captivate us and hold us under their spell, and they quietly nomenon known as a Brocken Spectre that occurs when the shape us to begin to see the world through the regime of the sun is positioned behind the observer and casts her shadow painting. They bring us to speech through their silence. onto water vapour to form a complete circular rainbow around it. The curious thing is that the observer will only see her own shadow in the centre, even if she is not alone at the scene. PHILIP BRAHAM, If she runs, the shadow will run with her. The legend of the November 2017 NÂ° 11 | 21st Century Sublime | 2016 | oil on canvas | 92 Ă&amp;#x2014; 122 cm

TIDAL SWELL, FIRTH OF FORTH

PILGRIMS OF THE VOID

MORNING OF THE AUTUMN EQUINOX

LEAVES IN A POOL

CROSSING THE FIELDS AT NIGHT

NIGHTFALL OVER THE CARSE OF GOWRIE

PHILIP BRAHAM Philip Braham graduated from Duncan of Jordanstone College of Art in 1980, before completing a Postgraduate at the Royal Academy of Fine Art in Holland the following year. He then undertook a further year of research as visiting artist at the University of California at Los Angeles. Braham first came to prominence in the 1980â&amp;#x20AC;&amp;#x2122;s with the rise of figurative painting in Scotland that culminated in The Vigorous Imagination exhibition at the Scottish National Gallery of Modern Art in 1987. His first solo exhibition at The Scottish Gallery was in 1985, then subsequently in 1988, 2005 and 2014. Galleries in London, Berlin, Copenhagen, and Oslo have represented his work, and major public and private collections hold examples of his paintings and photographs. In 2010 he presented a solo exhibition at the Royal Scottish Academy during the Edinburgh Festival. Awards include the prestigious RSA Guthrie Award for Painting in 1994 and the RSA Morton Award for Lens Based Work, 2009. Braham works in both painting and photography, and his research investigates the differences and overlaps between these two disciplines, acknowledging that both are supremely capable of authentic representations of Being. His practice is informed by his interest in continental aesthetics. Philip Braham is Programme Director for Art and Philosophy at the University of Dundee.

Through the Woods, Jagged Art, London

The Vigorous Imagination: Then and Now, Fine Art Society, Edinburgh

The Call of the Sea, Open Eye Gallery, Edinburgh

The Glory of the Garden, Art Space, London

Published by The Scottish Gallery to coincide with the exhibition:

IN TIME,  AND SILENTLY

Philip Braham: In Time and Silently

For the start of 2018, we are thrilled to welcome back Philip Braham for his fifth solo exhibition at The Scottish Gallery. In these new landscape paintings, Braham explores themes of life and death through acutely observed moments in nature.