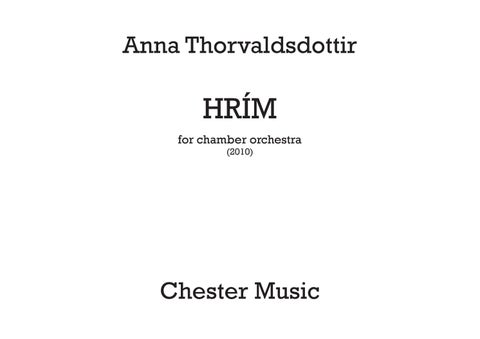 Horn in F Trombone Piano (doubling Celesta) 2 Violins Viola Violoncello Contrabass (with C extension) Duration: c. 8 minutes The score is in C. Orchestral parts are available on hire from the publisher. Written for UCSD New Music Ensemble. The first performance was given by CAPUT Ensemble on 5 May 2010 at the National Gallery, Reykjavik, Iceland.

Performance Note Hrím was written in late 2009 and early 2010 as a commission for the UCSD New Music Ensemble to serve as a companion piece to Ligeti’s Chamber Concerto. The piece is inspired by the notion of dispersion, represented as release and echoing in the sense that single elements in the music are released and spread through the ensemble in various ways throughout the process of the piece. The music is in one short movement. The work was funded in part by the Icelandic National Broadcasting Service Composers’ fund.

Notation Abbreviations s.p. sul ponticello s.t. sul tasto ord. takes back all special effects/performing techniques applied, including (but not limited to) sul pont., light bow pressure etc. w with General When pitches are sustained/slurred through an extended period of time, breathe/bow as necessary, not synchronised. Accidentals apply to one measure at a time.

, slow glissando that at the beginning of the note and glissandos throughout the

Woodwind/Brass Wind/air sounds, no pitch sounding. Can be fluttertongued. Performed on air – should mostly contain the air sound, with the subtle colour of the pitches. Double tonguing appears on air, written as follows – results in various timbre colors on air, with slight pitch coming through. Tongue flick on air, no pitch. Written in rhythmic patterns as a controlled flutter. Always merged into from a wind sound e.g. Flute: key clicks and tongue ram for percussive effect. The upper notehead indicates the key click, the lower note is the sounding pitch/colour effect. Strings Where there are written effects, other than regular pitches, the string(s) that the particular effect should be played on is indicated with a small notehead below the effect notehead (that refers to a way of playing). Effect noteheads are written around approximate pitch areas and are not to indicate specific pitches but rather the position of the hand on the string(s). Place left hand (not only one finger) lightly on indicated string, around given pitch area, not on harmonic. Fingers are not to be placed on exact pitches. This produces an un-pitched airy sound. The lower small note head indicates the open string to be performed on, the upper note head indicates the approximate position of the hand. When the note head is indicated with a glissando, move hand up or down the string as indicated (this will produce various harmonic colors to the airy sound as hand glissandos over the string/s), for example: Piano Pianist is going to need to be able to move around the instrument during performance. Prepared measures are going to be needed in order to hold pedal down as the performer moves around the instrument. The performer will need to have either a thimble or a coin to perform on the inside of the piano. From mm.6–9: Performed inside the piano by moving hands simultaneously in rather slow circular strokes over strings, over lowest register of the instrument. As crescendo and decrescendo are marked the hands should move gradually faster and slower respectively. From mm.22–25: Performed inside the piano with a thimble or a coin in quick strokes back and forth on the lowest E string while slowly sliding down the string as indicated. This results in a scratchy sound. The performer will need to prepare the pedal to be held pressed before m.22. In m.34: Right hand thoroughly presses the base of the string with finger (on the wire between tuning pins and hammers inside the piano) and releases right after the attack of the note in left hand, that is played on the keyboard. This results in a percussive attack that resonates through the color of the pitch, rather than merely producing the pitch. Note that material that is performed inside the piano sounds rather loud to the performer but does not project as easily, so dramatize dynamic marks when performing on the inside of the piano.