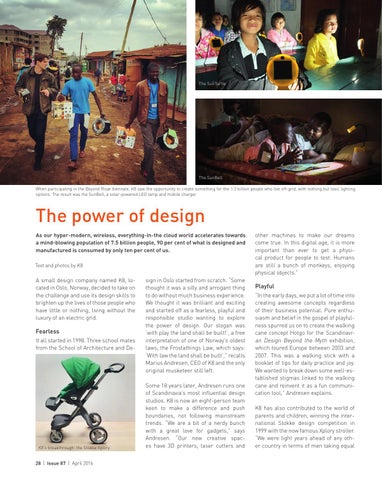 The SunBell When participating in the Beyond Risør biennale, K8 saw the opportunity to create something for the 1.3 billion people who live off-grid, with nothing but toxic lighting options. The result was the SunBell, a solar-powered LED lamp and mobile charger.

The power of design As our hyper-modern, wireless, everything-in-the cloud world accelerates towards a mind-blowing population of 7.5 billion people, 90 per cent of what is designed and manufactured is consumed by only ten per cent of us. Text and photos by K8

A small design company named K8, located in Oslo, Norway, decided to take on the challenge and use its design skills to brighten up the lives of those people who have little or nothing, living without the luxury of an electric grid.

Fearless It all started in 1998. Three school mates from the School of Architecture and De-

sign in Oslo started from scratch. “Some thought it was a silly and arrogant thing to do without much business experience. We thought it was brilliant and exciting and started off as a fearless, playful and responsible studio wanting to explore the power of design. Our slogan was ‘with play the land shall be built!’, a free interpretation of one of Norway’s oldest laws, the Frostathings Law, which says: ‘With law the land shall be built’,” recalls Marius Andresen, CEO of K8 and the only original musketeer still left. Some 18 years later, Andresen runs one of Scandinavia’s most influential design studios. K8 is now an eight-person team keen to make a difference and push boundaries, not following mainstream trends. “We are a bit of a nerdy bunch with a great love for gadgets,” says Andresen. “Our new creative spaces have 3D printers, laser cutters and

other machines to make our dreams come true. In this digital age, it is more important than ever to get a physical product for people to test. Humans are still a bunch of monkeys, enjoying physical objects.”

Playful “In the early days, we put a lot of time into creating awesome concepts regardless of their business potential. Pure enthusiasm and belief in the gospel of playfulness spurred us on to create the walking cane concept Hotgo for the Scandinavian Design Beyond the Myth exhibition, which toured Europe between 2003 and 2007. This was a walking stick with a booklet of tips for daily practice and joy. We wanted to break down some well-established stigmas linked to the walking cane and reinvent it as a fun communication tool,” Andresen explains. K8 has also contributed to the world of parents and children, winning the international Stokke design competition in 1999 with the now famous Xplory stroller. “We were light years ahead of any other country in terms of men taking equal