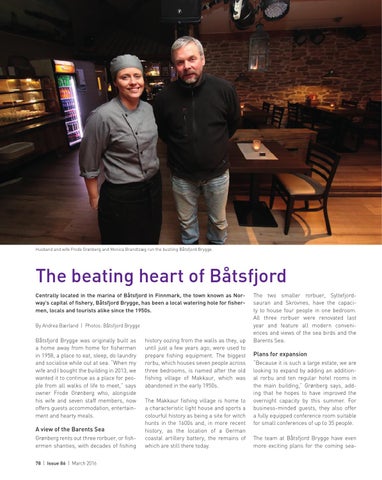 The beating heart of Båtsfjord Centrally located in the marina of Båtsfjord in Finnmark, the town known as Norway’s capital of fishery, Båtsfjord Brygge, has been a local watering hole for fishermen, locals and tourists alike since the 1950s. By Andrea Bærland | Photos: Båtsfjord Brygge

Båtsfjord Brygge was originally built as a home away from home for fishermen in 1958, a place to eat, sleep, do laundry and socialise while out at sea. “When my wife and I bought the building in 2013, we wanted it to continue as a place for people from all walks of life to meet,” says owner Frode Grønberg who, alongside his wife and seven staff members, now offers guests accommodation, entertainment and hearty meals.

A view of the Barents Sea Grønberg rents out three rorbuer, or fishermen shanties, with decades of fishing 78 | Issue 86 | March 2016

history oozing from the walls as they, up until just a few years ago, were used to prepare fishing equipment. The biggest rorbu, which houses seven people across three bedrooms, is named after the old fishing village of Makkaur, which was abandoned in the early 1950s. The Makkaur fishing village is home to a characteristic light house and sports a colourful history as being a site for witch hunts in the 1600s and, in more recent history, as the location of a German coastal artillery battery, the remains of which are still there today.

The two smaller rorbuer, Syltefjordsauran and Skrovnes, have the capacity to house four people in one bedroom. All three rorbuer were renovated last year and feature all modern conveniences and views of the sea birds and the Barents Sea.

Plans for expansion “Because it is such a large estate, we are looking to expand by adding an additional rorbu and ten regular hotel rooms in the main building,” Grønberg says, adding that he hopes to have improved the overnight capacity by this summer. For business-minded guests, they also offer a fully equipped conference room suitable for small conferences of up to 35 people. The team at Båtsfjord Brygge have even more exciting plans for the coming sea-