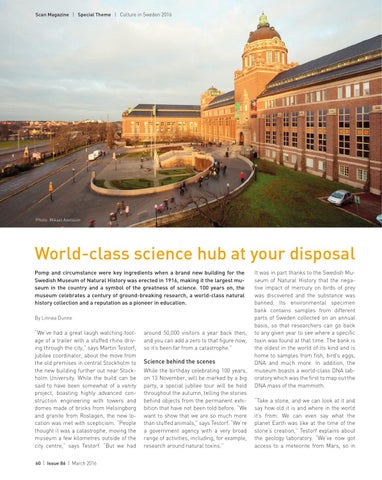 World-class science hub at your disposal Pomp and circumstance were key ingredients when a brand new building for the Swedish Museum of Natural History was erected in 1916, making it the largest museum in the country and a symbol of the greatness of science. 100 years on, the museum celebrates a century of ground-breaking research, a world-class natural history collection and a reputation as a pioneer in education. By Linnea Dunne

“We’ve had a great laugh watching footage of a trailer with a stuffed rhino driving through the city,” says Martin Testorf, jubilee coordinator, about the move from the old premises in central Stockholm to the new building further out near Stockholm University. While the build can be said to have been somewhat of a vanity project, boasting highly advanced construction engineering with towers and domes made of bricks from Helsingborg and granite from Roslagen, the new location was met with scepticism. “People thought it was a catastrophe, moving the museum a few kilometres outside of the city centre,” says Testorf. “But we had 60 | Issue 86 | March 2016

around 50,000 visitors a year back then, and you can add a zero to that figure now, so it’s been far from a catastrophe.”

Science behind the scenes While the birthday celebrating 100 years, on 13 November, will be marked by a big party, a special jubilee tour will be held throughout the autumn, telling the stories behind objects from the permanent exhibition that have not been told before. “We want to show that we are so much more than stuffed animals,” says Testorf. “We’re a government agency with a very broad range of activities, including, for example, research around natural toxins.”

It was in part thanks to the Swedish Museum of Natural History that the negative impact of mercury on birds of prey was discovered and the substance was banned. Its environmental specimen bank contains samples from different parts of Sweden collected on an annual basis, so that researchers can go back to any given year to see where a specific toxin was found at that time. The bank is the oldest in the world of its kind and is home to samples from fish, bird’s eggs, DNA and much more. In addition, the museum boasts a world-class DNA laboratory which was the first to map out the DNA mass of the mammoth. “Take a stone, and we can look at it and say how old it is and where in the world it’s from. We can even say what the planet Earth was like at the time of the stone’s creation,” Testorf explains about the geology laboratory. “We’ve now got access to a meteorite from Mars, so in