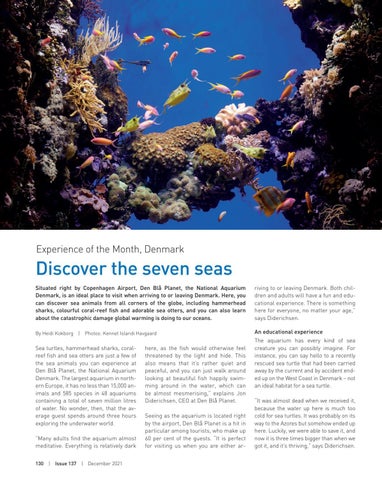 Experience of the Month, Denmark

Discover the seven seas Situated right by Copenhagen Airport, Den Blå Planet, the National Aquarium Denmark, is an ideal place to visit when arriving to or leaving Denmark. Here, you can discover sea animals from all corners of the globe, including hammerhead sharks, colourful coral-reef fish and adorable sea otters, and you can also learn about the catastrophic damage global warming is doing to our oceans.

riving to or leaving Denmark. Both children and adults will have a fun and educational experience. There is something here for everyone, no matter your age,” says Diderichsen.

Sea turtles, hammerhead sharks, coralreef fish and sea otters are just a few of the sea animals you can experience at Den Blå Planet, the National Aquarium Denmark. The largest aquarium in northern Europe, it has no less than 15,000 animals and 585 species in 48 aquariums containing a total of seven million litres of water. No wonder, then, that the average guest spends around three hours exploring the underwater world. “Many adults find the aquarium almost meditative. Everything is relatively dark 130  |  Issue 137  |  December 2021

here, as the fish would otherwise feel threatened by the light and hide. This also means that it’s rather quiet and peaceful, and you can just walk around looking at beautiful fish happily swimming around in the water, which can be almost mesmerising,” explains Jon Diderichsen, CEO at Den Blå Planet. Seeing as the aquarium is located right by the airport, Den Blå Planet is a hit in particular among tourists, who make up 60 per cent of the guests. “It is perfect for visiting us when you are either ar-

The aquarium has every kind of sea creature you can possibly imagine. For instance, you can say hello to a recently rescued sea turtle that had been carried away by the current and by accident ended up on the West Coast in Denmark – not an ideal habitat for a sea turtle. “It was almost dead when we received it, because the water up here is much too cold for sea turtles. It was probably on its way to the Azores but somehow ended up here. Luckily, we were able to save it, and now it is three times bigger than when we got it, and it’s thriving,” says Diderichsen.