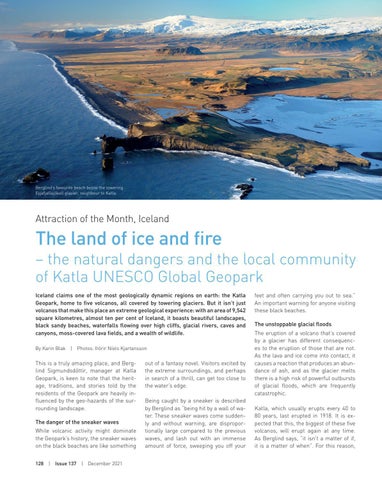 Attraction of the Month, Iceland

The land of ice and fire – the natural dangers and the local community of Katla UNESCO Global Geopark Iceland claims one of the most geologically dynamic regions on earth: the Katla Geopark, home to five volcanos, all covered by towering glaciers. But it isn’t just volcanos that make this place an extreme geological experience: with an area of 9,542 square kilometres, almost ten per cent of Iceland, it boasts beautiful landscapes, black sandy beaches, waterfalls flowing over high cliffs, glacial rivers, caves and canyons, moss-covered lava fields, and a wealth of wildlife. By Karin Blak  |  Photos: Þórir Níels Kjartansson

This is a truly amazing place, and Berglind Sigmundsdóttir, manager at Katla Geopark, is keen to note that the heritage, traditions, and stories told by the residents of the Geopark are heavily influenced by the geo-hazards of the surrounding landscape. The danger of the sneaker waves While volcanic activity might dominate the Geopark’s history, the sneaker waves on the black beaches are like something 128  |  Issue 137  |  December 2021

out of a fantasy novel. Visitors excited by the extreme surroundings, and perhaps in search of a thrill, can get too close to the water’s edge. Being caught by a sneaker is described by Berglind as “being hit by a wall of water. These sneaker waves come suddenly and without warning, are disproportionally large compared to the previous waves, and lash out with an immense amount of force, sweeping you off your

feet and often carrying you out to sea.” An important warning for anyone visiting these black beaches. The unstoppable glacial floods The eruption of a volcano that’s covered by a glacier has different consequences to the eruption of those that are not. As the lava and ice come into contact, it causes a reaction that produces an abundance of ash, and as the glacier melts there is a high risk of powerful outbursts of glacial floods, which are frequently catastrophic. Katla, which usually erupts every 40 to 80 years, last erupted in 1918. It is expected that this, the biggest of these five volcanos, will erupt again at any time. As Berglind says, “it isn’t a matter of if, it is a matter of when”. For this reason,