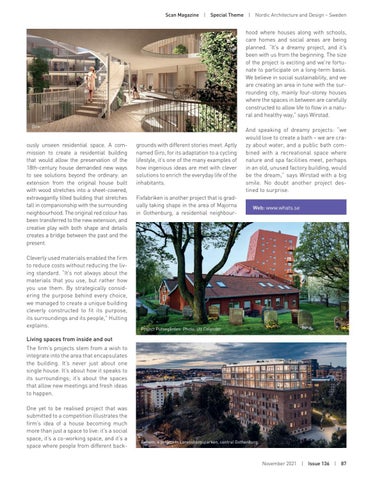 hood where houses along with schools, care homes and social areas are being planned. “It’s a dreamy project, and it’s been with us from the beginning. The size of the project is exciting and we’re fortunate to participate on a long-term basis. We believe in social sustainability, and we are creating an area in tune with the surrounding city, mainly four-storey houses where the spaces in between are carefully constructed to allow life to flow in a natural and healthy way,” says Wirstad. Giro.

ously unseen residential space. A commission to create a residential building that would allow the preservation of the 18th-century house demanded new ways to see solutions beyond the ordinary: an extension from the original house built with wood stretches into a sheet-covered, extravagantly tilted building that stretches tall in companionship with the surrounding neighbourhood. The original red colour has been transferred to the new extension, and creative play with both shape and details creates a bridge between the past and the present. Cleverly used materials enabled the firm to reduce costs without reducing the living standard. “It’s not always about the materials that you use, but rather how you use them. By strategically considering the purpose behind every choice, we managed to create a unique building cleverly constructed to fit its purpose, its surroundings and its people,” Hulting explains.

grounds with different stories meet. Aptly named Giro, for its adaptation to a cycling lifestyle, it’s one of the many examples of how ingenious ideas are met with clever solutions to enrich the everyday life of the inhabitants. Fixfabriken is another project that is gradually taking shape in the area of Majorna in Gothenburg, a residential neighbour-

And speaking of dreamy projects: “we would love to create a bath – we are crazy about water, and a public bath combined with a recreational space where nature and spa facilities meet, perhaps in an old, unused factory building, would be the dream,” says Wirstad with a big smile. No doubt another project destined to surprise. Web: www.whats.se

Living spaces from inside and out The firm’s projects stem from a wish to integrate into the area that encapsulates the building. It’s never just about one single house. It’s about how it speaks to its surroundings; it’s about the spaces that allow new meetings and fresh ideas to happen. One yet to be realised project that was submitted to a competition illustrates the firm’s idea of a house becoming much more than just a space to live: it’s a social space, it’s a co-working space, and it’s a space where people from different back-