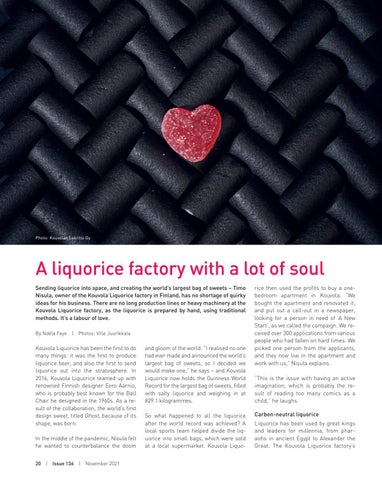 Kouvola Liquorice has been the first to do many things: it was the first to produce liquorice beer, and also the first to send liquorice out into the stratosphere. In 2016, Kouvola Liquorice teamed up with renowned Finnish designer Eero Aarnio, who is probably best known for the Ball Chair he designed in the 1960s. As a result of the collaboration, the world’s first design sweet, titled Ghost, because of its shape, was born. In the middle of the pandemic, Nisula felt he wanted to counterbalance the doom 20  |  Issue 136  |  November 2021

and gloom of the world. “I realised no one had ever made and announced the world’s largest bag of sweets, so I decided we would make one,” he says – and Kouvola Liquorice now holds the Guinness World Record for the largest bag of sweets, filled with salty liquorice and weighing in at 829.1 kilogrammes. So what happened to all the liquorice after the world record was achieved? A local sports team helped divide the liquorice into small bags, which were sold at a local supermarket. Kouvola Liquo-

rice then used the profits to buy a onebedroom apartment in Kouvola. “We bought the apartment and renovated it, and put out a call-out in a newspaper, looking for a person in need of ‘A New Start’, as we called the campaign. We received over 300 applications from various people who had fallen on hard times. We picked one person from the applicants, and they now live in the apartment and work with us,” Nisula explains. “This is the issue with having an active imagination, which is probably the result of reading too many comics as a child,” he laughs. Carbon-neutral liquorice Liquorice has been used by great kings and leaders for millennia, from pharaohs in ancient Egypt to Alexander the Great. The Kouvola Liquorice factory’s