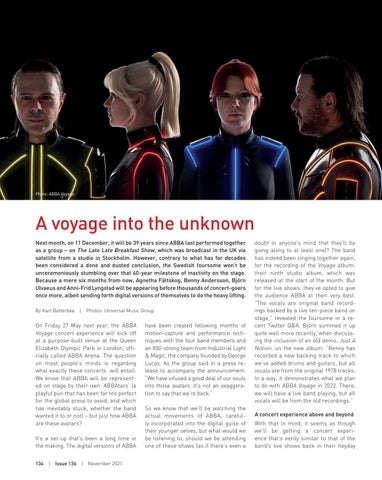 A voyage into the unknown Next month, on 11 December, it will be 39 years since ABBA last performed together as a group – on The Late Late Breakfast Show, which was broadcast in the UK via satellite from a studio in Stockholm. However, contrary to what has for decades been considered a done and dusted conclusion, the Swedish foursome won’t be unceremoniously stumbling over that 40-year milestone of inactivity on the stage. Because a mere six months from now, Agnetha Fältskog, Benny Andersson, Björn Ulvaeus and Anni-Frid Lyngstad will be appearing before thousands of concert-goers once more, albeit sending forth digital versions of themselves to do the heavy lifting. By Karl Batterbee  |  Photos: Universal Music Group

On Friday 27 May next year, the ABBA Voyage concert experience will kick off at a purpose-built venue at the Queen Elizabeth Olympic Park in London, officially called ABBA Arena. The question on most people’s minds is regarding what exactly these concerts will entail. We know that ABBA will be represented on stage by their own ‘ABBAtars’ (a playful pun that has been far too perfect for the global press to avoid, and which has inevitably stuck, whether the band wanted it to or not) – but just how ABBA are these avatars? It’s a set-up that’s been a long time in the making. The digital versions of ABBA 134  |  Issue 136  |  November 2021

have been created following months of motion-capture and performance techniques with the four band members and an 850-strong team from Industrial Light &amp; Magic, the company founded by George Lucas. As the group said in a press release to accompany the announcement: “We have infused a good deal of our souls into those avatars. It’s not an exaggeration to say that we’re back.” So we know that we’ll be watching the actual movements of ABBA, carefully incorporated into the digital guise of their younger selves, but what would we be listening to, should we be attending one of these shows (as if there’s even a

doubt in anyone’s mind that they’ll be going along to at least one)? The band has indeed been singing together again, for the recording of the Voyage album: their ninth studio album, which was released at the start of the month. But for the live shows, they’ve opted to give the audience ABBA at their very best. “The vocals are original band recordings backed by a live ten-piece band on stage,” revealed the foursome in a recent Twitter Q&amp;A. Björn summed it up quite well more recently, when discussing the inclusion of an old demo, Just A Notion, on the new album: “Benny has recorded a new backing track to which we’ve added drums and guitars, but all vocals are from the original 1978 tracks. In a way, it demonstrates what we plan to do with ABBA Voyage in 2022. There, we will have a live band playing, but all vocals will be from the old recordings.” A concert experience above and beyond With that in mind, it seems as though we’ll be getting a concert experience that’s eerily similar to that of the band’s live shows back in their heyday