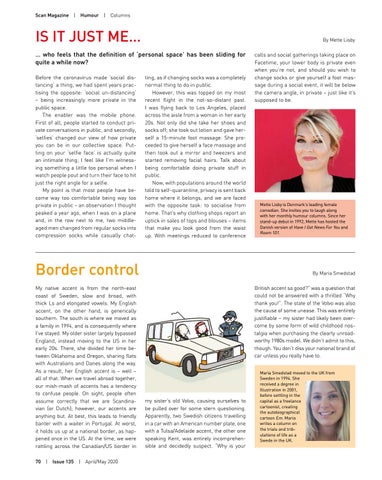 … who feels that the definition of ‘personal space’ has been sliding for quite a while now? Before the coronavirus made ‘social distancing’ a thing, we had spent years practising the opposite: ‘social un-distancing’ – being increasingly more private in the public space. The enabler was the mobile phone. First of all, people started to conduct private conversations in public, and secondly, ‘selfies’ changed our view of how private you can be in our collective space. Putting on your ‘selfie face’ is actually quite an intimate thing; I feel like I’m witnessing something a little too personal when I watch people pout and turn their face to hit just the right angle for a selfie. My point is that most people have become way too comfortable being way too private in public – an observation I thought peaked a year ago, when I was on a plane and, in the row next to me, two middle-  aged men changed from regular socks into compression socks while casually chat-

ting, as if changing socks was a completely normal thing to do in public. However, this was topped on my most recent flight in the not-so-distant past. I was flying back to Los Angeles, placed across the aisle from a woman in her early 20s. Not only did she take her shoes and socks off; she took out lotion and gave herself a 15-minute foot massage. She proceeded to give herself a face massage and then took out a mirror and tweezers and started removing facial hairs. Talk about being comfortable doing private stuff in public. Now, with populations around the world told to self-quarantine, privacy is sent back home where it belongs, and we are faced with the opposite task: to socialise from home. That’s why clothing shops report an uptick in sales of tops and blouses – items that make you look good from the waist up. With meetings reduced to conference

Border control My native accent is from the north-east coast of Sweden, slow and broad, with thick Ls and elongated vowels. My English accent, on the other hand, is generically southern. The south is where we moved as a family in 1994, and is consequently where I’ve stayed. My older sister largely bypassed England, instead moving to the US in her early 20s. There, she divided her time between Oklahoma and Oregon, sharing flats with Australians and Danes along the way. As a result, her English accent is – well – all of that. When we travel abroad together, our mish-mash of accents has a tendency to confuse people. On sight, people often assume correctly that we are Scandinavian (or Dutch); however, our accents are anything but. At best, this leads to friendly banter with a waiter in Portugal. At worst, it holds us up at a national border, as happened once in the US. At the time, we were rattling across the Canadian/US border in 70  |  Issue 135  |  April/May 2020

calls and social gatherings taking place on Facetime, your lower body is private even when you’re not, and should you wish to change socks or give yourself a foot massage during a social event, it will be below the camera angle, in private – just like it’s supposed to be.

British accent so good?” was a question that could not be answered with a thrilled “Why thank you!”. The state of the Volvo was also the cause of some unease. This was entirely justifiable – my sister had likely been overcome by some form of wild childhood nostalgia when purchasing the clearly unroadworthy 1980s model. We didn’t admit to this, though. You don’t diss your national brand of car unless you really have to.

my sister’s old Volvo, causing ourselves to be pulled over for some stern questioning. Apparently, two Swedish citizens travelling in a car with an American number plate, one with a Tulsa/Adelaide accent, the other one speaking Kent, was entirely incomprehensible and decidedly suspect. “Why is your