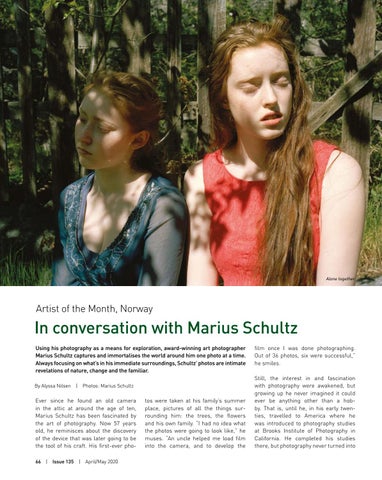 Artist of the Month, Norway

In conversation with Marius Schultz Using his photography as a means for exploration, award-winning art photographer Marius Schultz captures and immortalises the world around him one photo at a time. Always focusing on what’s in his immediate surroundings, Schultz’ photos are intimate revelations of nature, change and the familiar. By Alyssa Nilsen  |  Photos: Marius Schultz

Ever since he found an old camera in the attic at around the age of ten,  Marius Schultz has been fascinated by the art of photography. Now 57 years  old, he reminisces about the discovery of the device that was later going to be the tool of his craft. His first-ever pho66  |  Issue 135  |  April/May 2020

tos were taken at his family’s summer place, pictures of all the things surrounding him: the trees, the flowers and his own family. “I had no idea what the photos were going to look like,” he muses. “An uncle helped me load film  into the camera, and to develop the

film once I was done photographing. Out of 36 photos, six were successful,”  he smiles. Still, the interest in and fascination with photography were awakened, but growing up he never imagined it could  ever be anything other than a hobby. That is, until he, in his early twenties, travelled to America where he was introduced to photography studies at Brooks Institute of Photography in  California. He completed his studies there, but photography never turned into