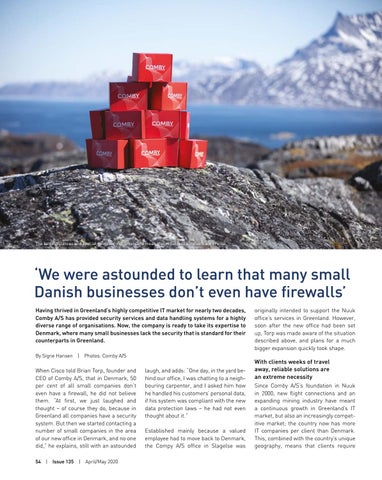 The large distances and special geography of Greenland mean that reliable IT solutions are crucial.

‘We were astounded to learn that many small Danish businesses don’t even have firewalls’ Having thrived in Greenland’s highly competitive IT market for nearly two decades, Comby A/S has provided security services and data handling systems for a highly diverse range of organisations. Now, the company is ready to take its expertise to Denmark, where many small businesses lack the security that is standard for their counterparts in Greenland. By Signe Hansen  |  Photos: Comby A/S

When Cisco told Brian Torp, founder and CEO of Comby A/S, that in Denmark, 50 per cent of all small companies don’t even have a firewall, he did not believe them. “At first, we just laughed and thought – of course they do, because in Greenland all companies have a security system. But then we started contacting a number of small companies in the area of our new office in Denmark, and no one did,” he explains, still with an astounded 54  |  Issue 135  |  April/May 2020

laugh, and adds: “One day, in the yard behind our office, I was chatting to a neighbouring carpenter, and I asked him how he handled his customers’ personal data, if his system was compliant with the new data protection laws – he had not even thought about it.” Established mainly because a valued employee had to move back to Denmark, the Compy A/S office in Slagelse was

originally intended to support the Nuuk office’s services in Greenland. However, soon after the new office had been set up, Torp was made aware of the situation described above, and plans for a much bigger expansion quickly took shape.

With clients weeks of travel away, reliable solutions are an extreme necessity Since Comby A/S’s foundation in Nuuk in 2000, new flight connections and an expanding mining industry have meant a continuous growth in Greenland’s IT market, but also an increasingly competitive market; the country now has more IT companies per client than Denmark. This, combined with the country’s unique geography, means that clients require