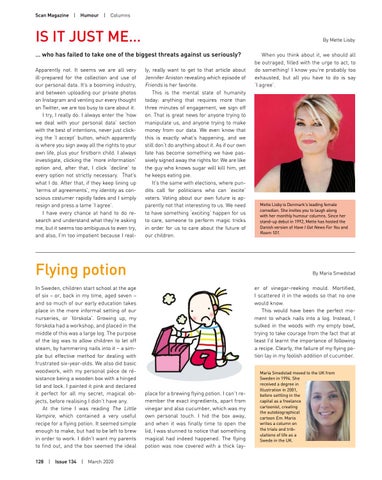 … who has failed to take one of the biggest threats against us seriously? Apparently not. It seems we are all very ill-prepared for the collection and use of our personal data. It’s a booming industry, and between uploading our private photos on Instagram and venting our every thought on Twitter, we are too busy to care about it. I try, I really do. I always enter the ‘how we deal with your personal data’ section with the best of intentions, never just clicking the ‘I accept’ button, which apparently is where you sign away all the rights to your own life, plus your firstborn child. I always investigate, clicking the ‘more information’ option and, after that, I click ‘decline’ to every option not strictly necessary. That’s what I do. After that, if they keep lining up ‘terms of agreements’, my identity as conscious costumer rapidly fades and I simply resign and press a lame ‘I agree’. I have every chance at hand to do research and understand what they’re asking me, but it seems too ambiguous to even try, and also, I’m too impatient because I real-

ly, really want to get to that article about Jennifer Aniston revealing which episode of Friends is her favorite. This is the mental state of humanity today: anything that requires more than three minutes of engagement, we sign off on. That is great news for anyone trying to manipulate us, and anyone trying to make money from our data. We even know that this is exactly what’s happening, and we still don’t do anything about it. As if our own fate has become something we have passively signed away the rights for. We are like the guy who knows sugar will kill him, yet he keeps eating pie. It’s the same with elections, where pundits call for politicians who can ‘excite’ voters. Voting about our own future is apparently not that interesting to us. We need to have something ‘exciting’ happen for us to care, someone to perform magic tricks in order for us to care about the future of  our children.

Flying potion In Sweden, children start school at the age of six – or, back in my time, aged seven – and so much of our early education takes place in the more informal setting of our nurseries, or ‘förskola’. Growing up, my förskola had a workshop, and placed in the middle of this was a large log. The purpose of the log was to allow children to let off steam, by hammering nails into it – a simple but effective method for dealing with frustrated six-year-olds. We also did basic woodwork, with my personal pièce de résistance being a wooden box with a hinged lid and lock. I painted it pink and declared it perfect for all my secret, magical objects, before realising I didn’t have any. At the time I was reading The Little Vampire, which contained a very useful recipe for a flying potion. It seemed simple enough to make, but had to be left to brew in order to work. I didn’t want my parents to find out, and the box seemed the ideal 128  |  Issue 134  |  March 2020

When you think about it, we should all be outraged, filled with the urge to act, to do something! I know you’re probably too exhausted, but all you have to do is say  ‘I agree’.

er of vinegar-reeking mould. Mortified, I scattered it in the woods so that no one would know. This would have been the perfect moment to whack nails into a log. Instead, I sulked in the woods with my empty bowl, trying to take courage from the fact that at least I’d learnt the importance of following a recipe. Clearly, the failure of my flying potion lay in my foolish addition of cucumber.

place for a brewing flying potion. I can’t remember the exact ingredients, apart from vinegar and also cucumber, which was my own personal touch. I hid the box away, and when it was finally time to open the lid, I was stunned to notice that something magical had indeed happened. The flying potion was now covered with a thick lay-