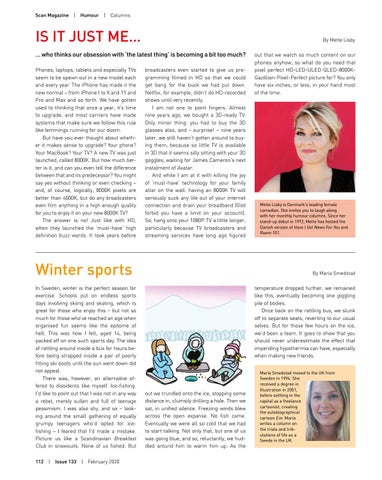 … who thinks our obsession with ‘the latest thing’ is becoming a bit too much? Phones, laptops, tablets and especially TVs seem to be spewn out in a new model each and every year. The iPhone has made it the new normal – from iPhone I to X and 11 and Pro and Max and so forth. We have gotten used to thinking that once a year, it’s time to upgrade, and most carriers have made systems that make sure we follow this rule like lemmings running for our doom. But have you ever thought about whether it makes sense to upgrade? Your phone? Your MacBook? Your TV? A new TV was just launched, called 8000K. But how much better is it, and can you even tell the difference between that and its predecessor? You might say yes without thinking or even checking – and, of course, logically, 8000K pixels are better than 4000K, but do any broadcasters even film anything in a high enough quality for you to enjoy it on your new 8000K TV? The answer is no! Just like with HD, when they launched the ‘must-have’ high definition buzz words. It took years before

broadcasters even started to give us programming filmed in HD so that we could get bang for the buck we had put down. Netflix, for example, didn’t do HD-recorded shows until very recently. I am not one to point fingers. Almost nine years ago, we bought a 3D-ready TV. Only minor thing: you had to buy the 3D glasses also, and – surprise! – nine years later, we still haven’t gotten around to buying them, because so little TV is available in 3D that it seems silly sitting with your 3D goggles, waiting for James Cameron’s next instalment of Avatar. And while I am at it with killing the joy of ‘must-have’ technology for your family altar on the wall: having an 8000K TV will seriously suck any life out of your internet connection and drain your broadband (God forbid you have a limit on your account). So, hang onto your 1080P TV a little longer, particularly because TV broadcasters and streaming services have long ago figured

Winter sports In Sweden, winter is the perfect season for exercise. Schools put on endless sports days involving skiing and skating, which is great for those who enjoy this – but not so much for those who’ve reached an age when organised fun seems like the epitome of hell. This was how I felt, aged 14, being packed off on one such sports day. The idea of rattling around inside a bus for hours before being strapped inside a pair of poorly fitting ski boots until the sun went down did not appeal. There was, however, an alternative offered to dissidents like myself. Ice-fishing. I’d like to point out that I was not in any way a rebel, merely sullen and full of teenage pessimism. I was also shy, and so – looking around the small gathering of equally grumpy teenagers who’d opted for icefishing – I feared that I’d made a mistake. Picture us like a Scandinavian Breakfast Club in snowsuits. None of us fished. But 112  |  Issue 133  |  February 2020

out that we watch so much content on our phones anyhow, so what do you need that pixel perfect HD-LED-ULED-QLED-8000KGazillion-Pixel-Perfect picture for? You only have six inches, or less, in your hand most of the time.

temperature dropped further, we remained like this, eventually becoming one giggling pile of bodies. Once back on the rattling bus, we slunk off to separate seats, reverting to our usual selves. But for those few hours on the ice, we’d been a team. It goes to show that you should never underestimate the effect that impending hypothermia can have, especially when making new friends.

out we trundled onto the ice, stopping some distance in, clumsily drilling a hole. Then we sat, in unified silence. Freezing winds blew across the open expanse. No fish came. Eventually we were all so cold that we had to start talking. Not only that, but one of us was going blue, and so, reluctantly, we huddled around him to warm him up. As the