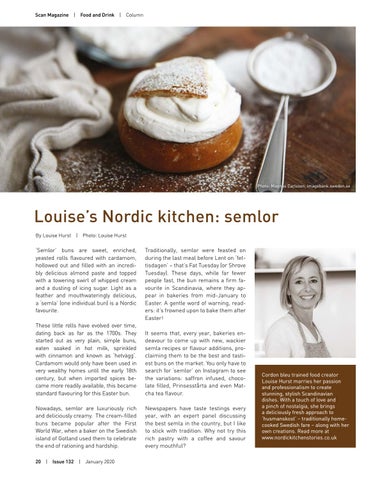 ‘Semlor’ buns are sweet, enriched, yeasted rolls flavoured with cardamom, hollowed out and filled with an incredibly delicious almond paste and topped with a towering swirl of whipped cream and a dusting of icing sugar. Light as a feather and mouthwateringly delicious, a ‘semla’ (one individual bun) is a Nordic favourite.

Traditionally, semlor  were feasted on during the last meal before Lent on ‘fettisdagen’ – that’s Fat Tuesday (or Shrove Tuesday). These days, while far fewer people fast, the bun remains a firm favourite in Scandinavia, where they appear in bakeries from mid-January to Easter. A gentle word of warning, readers: it’s frowned upon to bake them after Easter!

These little rolls have evolved over time, dating back as far as the 1700s. They started out as very plain, simple buns, eaten soaked in hot milk, sprinkled with cinnamon and known as ‘hetvägg’.   Cardamom would only have been used in very wealthy homes until the early 18th century, but when imported spices became more readily available, this became standard flavouring for this Easter bun.

It seems that, every year, bakeries endeavour to come up with new, wackier semla recipes or flavour additions, proclaiming them to be the best and tastiest buns on the market. You only have to search for ‘semlor’ on Instagram to see the variations: saffron infused, chocolate filled, Prinsesstårta  and even Matcha tea flavour.

Nowadays, semlor  are luxuriously rich and deliciously creamy.  The cream-filled buns became popular after the First World War, when a baker on the Swedish island of Gotland used them to celebrate the end of rationing and hardship.

Newspapers have taste testings every year, with an expert panel discussing the best semla in the country, but I like to stick with tradition. Why not try this rich pastry with a coffee and savour every mouthful?

As a magazine promoting a region that is consistently ranked among the happiest and most contented in the world, we thought it apt to start...

As a magazine promoting a region that is consistently ranked among the happiest and most contented in the world, we thought it apt to start...