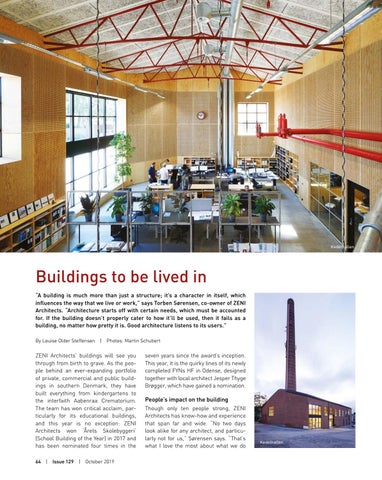 Buildings to be lived in “A building is much more than just a structure; it’s a character in itself, which influences the way that we live or work,” says Torben Sørensen, co-owner of ZENI Architects. “Architecture starts off with certain needs, which must be accounted for. If the building doesn’t properly cater to how it’ll be used, then it fails as a building, no matter how pretty it is. Good architecture listens to its users.” By Louise Older Steffensen  |  Photos: Martin Schubert

ZENI Architects’ buildings will see you through from birth to grave. As the people behind an ever-expanding portfolio of private, commercial and public buildings in southern Denmark, they have built everything from kindergartens to the interfaith Aabenraa Crematorium. The team has won critical acclaim, particularly for its educational buildings, and this year is no exception: ZENI Architects won ‘Årets Skolebyggeri’ (School Building of the Year) in 2017 and has been nominated four times in the 64  |  Issue 129  |  October 2019

seven years since the award’s inception. This year, it is the quirky lines of its newly completed FYNs HF in Odense, designed together with local architect Jesper Thyge Brøgger, which have gained a nomination.

People’s impact on the building Though only ten people strong, ZENI Architects has know-how and experience that span far and wide. “No two days look alike for any architect, and particularly not for us,” Sørensen says. “That’s what I love the most about what we do