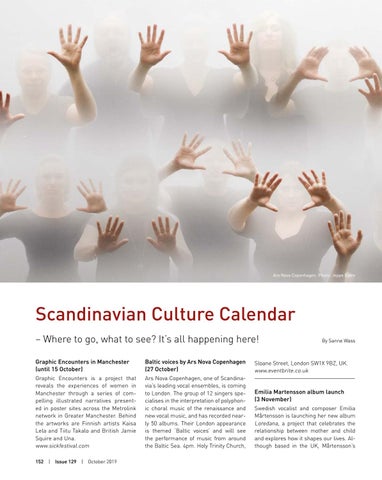 Scandinavian Culture Calendar – Where to go, what to see? It’s all happening here! Graphic Encounters in Manchester (until 15 October)

Graphic Encounters is a project that reveals the experiences of women in Manchester through a series of compelling illustrated narratives presented in poster sites across the Metrolink network in Greater Manchester. Behind the artworks are Finnish artists Kaisa Lela and Tiitu Takalo and British Jamie Squire and Una. www.sickfestival.com

Ars Nova Copenhagen, one of Scandinavia’s leading vocal ensembles, is coming to London. The group of 12 singers specialises in the interpretation of polyphonic choral music of the renaissance and new vocal music, and has recorded nearly 50 albums. Their London appearance is themed ‘Baltic voices’ and will see the performance of music from around the Baltic Sea. 4pm. Holy Trinity Church,

Emilia Martensson album launch (3 November) Swedish vocalist and composer Emilia Mårtensson is launching her new album Loredana, a project that celebrates the relationship between mother and child and explores how it shapes our lives. Although based in the UK, Mårtensson’s