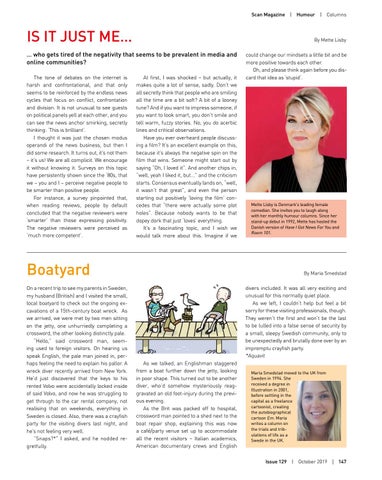 … who gets tired of the negativity that seems to be prevalent in media and online communities? The tone of debates on the internet is harsh and confrontational, and that only seems to be reinforced by the endless news cycles that focus on conflict, confrontation and division. It is not unusual to see guests on political panels yell at each other, and you can see the news anchor smirking, secretly thinking: ‘This is brilliant’. I thought it was just the chosen modus operandi of the news business, but then I did some research. It turns out, it’s not them – it’s us! We are all complicit. We encourage it without knowing it. Surveys on this topic have persistently shown since the ‘80s, that we – you and I – perceive negative people to be smarter than positive people. For instance, a survey pinpointed that, when reading reviews, people by default concluded that the negative reviewers were ‘smarter’ than those expressing positivity. The negative reviewers were perceived as ‘much more competent’.

At first, I was shocked – but actually, it makes quite a lot of sense, sadly. Don’t we all secretly think that people who are smiling all the time are a bit soft? A bit of a looney tune? And if you want to impress someone, if you want to look smart, you don’t smile and tell warm, fuzzy stories. No, you do acerbic lines and critical observations. Have you ever overheard people discussing a film? It’s an excellent example on this, because it’s always the negative spin on the film that wins. Someone might start out by saying “Oh, I loved it”. And another chips in, “well, yeah I liked it, but...” and the criticism starts. Consensus eventually lands on, “well, it wasn’t that great”, and even the person starting out positively ‘loving the film’ concedes that “there were actually some plot holes”. Because nobody wants to be that dopey dork that just ‘loves’ everything. It’s a fascinating topic, and I wish we would talk more about this. Imagine if we

Boatyard On a recent trip to see my parents in Sweden, my husband (British) and I visited the small, local boatyard to check out the ongoing excavations of a 15th-century boat wreck. As we arrived, we were met by two men sitting on the jetty, one unhurriedly completing a crossword, the other looking distinctly pale. “Hello,” said crossword man, seeming used to foreign visitors. On hearing us speak English, the pale man joined in, perhaps feeling the need to explain his pallor. A wreck diver recently arrived from New York. He’d just discovered that the keys to his rented Volvo were accidentally locked inside of said Volvo, and now he was struggling to get through to the car rental company, not realising that on weekends, everything in Sweden is closed. Also, there was a crayfish party for the visiting divers last night, and he’s not feeling very well. “Snaps?*” I asked, and he nodded regretfully.

could change our mindsets a little bit and be more positive towards each other. Oh, and please think again before you discard that idea as ‘stupid’.

divers included. It was all very exciting and unusual for this normally quiet place. As we left, I couldn’t help but feel a bit sorry for these visiting professionals, though. They weren’t the first and won’t be the last to be lulled into a false sense of security by a small, sleepy Swedish community, only to be unexpectedly and brutally done over by an impromptu crayfish party. *Aquavit As we talked, an Englishman staggered from a boat further down the jetty, looking in poor shape. This turned out to be another diver, who’d somehow mysteriously reaggravated an old foot-injury during the previous evening. As the Brit was packed off to hospital, crossword man pointed to a shed next to the boat repair shop, explaining this was now a café/party venue set up to accommodate all the recent visitors – Italian academics, American documentary crews and English