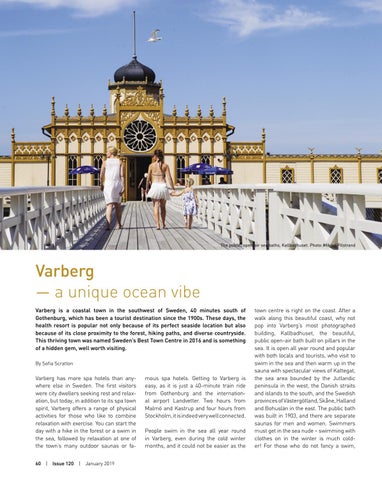 Varberg — a unique ocean vibe Varberg is a coastal town in the southwest of Sweden, 40 minutes south of Gothenburg, which has been a tourist destination since the 1900s. These days, the health resort is popular not only because of its perfect seaside location but also because of its close proximity to the forest, hiking paths, and diverse countryside. This thriving town was named Sweden’s Best Town Centre in 2016 and is something of a hidden gem, well worth visiting. By Sofia Scratton

Varberg has more spa hotels than anywhere else in Sweden. The first visitors were city dwellers seeking rest and relaxation, but today, in addition to its spa town spirit, Varberg offers a range of physical activities for those who like to combine relaxation with exercise. You can start the day with a hike in the forest or a swim in the sea, followed by relaxation at one of the town’s many outdoor saunas or fa60  |  Issue 120  |  January 2019

mous spa hotels. Getting to Varberg is easy, as it is just a 40-minute train ride from Gothenburg and the international airport Landvetter. Two hours from Malmö and Kastrup and four hours from Stockholm, it is indeed very well connected. People swim in the sea all year round in Varberg, even during the cold winter months, and it could not be easier as the

town centre is right on the coast. After a walk along this beautiful coast, why not pop into Varberg’s most photographed building, Kallbadhuset, the beautiful, public open-air bath built on pillars in the sea. It is open all year round and popular with both locals and tourists, who visit to swim in the sea and then warm up in the sauna with spectacular views of Kattegat, the sea area bounded by the Jutlandic peninsula in the west, the Danish straits and islands to the south, and the Swedish provinces of Västergötland, Skåne, Halland and Bohuslän in the east. The public bath was built in 1903, and there are separate saunas for men and women. Swimmers must get in the sea nude – swimming with clothes on in the winter is much colder! For those who do not fancy a swim,