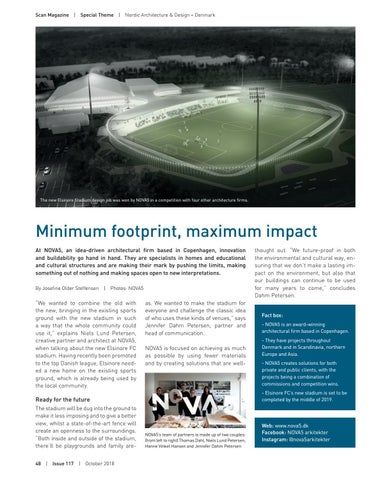 The new Elsinore Stadium design job was won by NOVA5 in a competition with four other architecture firms.

Minimum footprint, maximum impact At NOVA5, an idea-driven architectural firm based in Copenhagen, innovation and buildability go hand in hand. They are specialists in homes and educational and cultural structures and are making their mark by pushing the limits, making something out of nothing and making spaces open to new interpretations. By Josefine Older Steffensen  |  Photos: NOVA5

“We wanted to combine the old with the new, bringing in the existing sports ground with the new stadium in such a way that the whole community could use it,” explains Niels Lund Petersen, creative partner and architect at NOVA5, when talking about the new Elsinore FC stadium. Having recently been promoted to the top Danish league, Elsinore needed a new home on the existing sports ground, which is already being used by the local community.

as. We wanted to make the stadium for everyone and challenge the classic idea of who uses these kinds of venues,” says Jennifer Dahm Petersen, partner and head of communication. NOVA5 is focused on achieving as much as possible by using fewer materials and by creating solutions that are well-

Fact box: - NOVA5 is an award-winning architectural firm based in Copenhagen. - They have projects throughout Denmark and in Scandinavia, northern Europe and Asia. - NOVA5 creates solutions for both private and public clients, with the projects being a combination of commissions and competition wins. - Elsinore FC’s new stadium is set to be completed by the middle of 2019.

Ready for the future The stadium will be dug into the ground to make it less imposing and to give a better view, whilst a state-of-the-art fence will create an openness to the surroundings. “Both inside and outside of the stadium, there’ll be playgrounds and family are-

thought out. “We future-proof in both the environmental and cultural way, ensuring that we don’t make a lasting impact on the environment, but also that our buildings can continue to be used for many years to come,” concludes Dahm Petersen.

NOVA5’s team of partners is made up of two couples: (from left to right) Thomas Dahl, Niels Lund Petersen, Hanne Vinkel Hansen and Jennifer Dahm Petersen