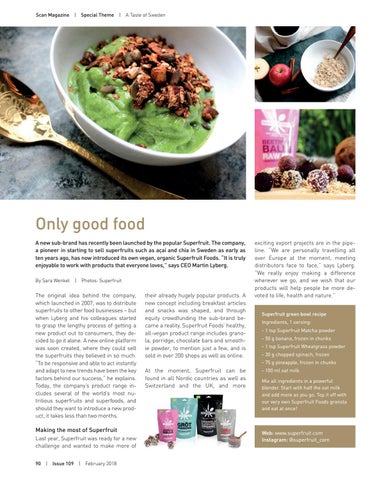 Only good food A new sub-brand has recently been launched by the popular Superfruit. The company, a pioneer in starting to sell superfruits such as açaí and chia in Sweden as early as ten years ago, has now introduced its own vegan, organic Superfruit Foods. “It is truly enjoyable to work with products that everyone loves,” says CEO Martin Lyberg. By Sara Wenkel  |  Photos: Superfruit

The original idea behind the company, which launched in 2007, was to distribute superfruits to other food businesses – but when Lyberg and his colleagues started to grasp the lengthy process of getting a new product out to consumers, they decided to go it alone. A new online platform was soon created, where they could sell the superfruits they believed in so much. “To be responsive and able to act instantly and adapt to new trends have been the key factors behind our success,” he explains. Today, the company’s product range includes several of the world’s most nutritious superfruits and superfoods, and should they want to introduce a new product, it takes less than two months.

Making the most of Superfruit Last year, Superfruit was ready for a new challenge and wanted to make more of 90  |  Issue 109  |  February 2018

their already hugely popular products. A new concept including breakfast articles and snacks was shaped, and through equity crowdfunding the sub-brand became a reality. Superfruit Foods’ healthy, all-vegan product range includes granola, porridge, chocolate bars and smoothie powder, to mention just a few, and is sold in over 200 shops as well as online.

exciting export projects are in the pipeline. “We are personally travelling all over Europe at the moment, meeting distributors face to face,” says Lyberg. “We really enjoy making a difference wherever we go, and we wish that our products will help people be more devoted to life, health and nature.” Superfruit green bowl recipe Ingredients, 1 serving: - 1 tsp Superfruit Matcha powder - 50 g banana, frozen in chunks - 1 tsp Superfruit Wheatgrass powder - 30 g chopped spinach, frozen - 75 g pineapple, frozen in chunks

At the moment, Superfruit can be found in all Nordic countries as well as Switzerland and the UK, and more

- 100 ml oat milk Mix all ingredients in a powerful blender. Start with half the oat milk and add more as you go. Top it off with our very own Superfruit Foods granola and eat at once!