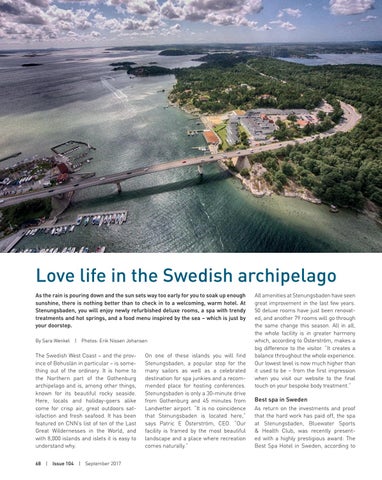 Love life in the Swedish archipelago As the rain is pouring down and the sun sets way too early for you to soak up enough sunshine, there is nothing better than to check in to a welcoming, warm hotel. At Stenungsbaden, you will enjoy newly refurbished deluxe rooms, a spa with trendy treatments and hot springs, and a food menu inspired by the sea – which is just by your doorstep. By Sara Wenkel  |  Photos: Erik Nissen Johansen

The Swedish West Coast – and the province of Bohuslän in particular – is something out of the ordinary. It is home to the Northern part of the Gothenburg archipelago and is, among other things, known for its beautiful rocky seaside. Here, locals and holiday-goers alike come for crisp air, great outdoors satisfaction and fresh seafood. It has been featured on CNN’s list of ten of the Last Great Wildernesses in the World, and with 8,000 islands and islets it is easy to understand why. 68  |  Issue 104  |  September 2017

On one of these islands you will find Stenungsbaden, a popular stop for the many sailors as well as a celebrated destination for spa junkies and a recommended place for hosting conferences. Stenungsbaden is only a 30-minute drive from Gothenburg and 45 minutes from Landvetter airport. “It is no coincidence that Stenungsbaden is located here,” says Patric E Österström, CEO. “Our facility is framed by the most beautiful landscape and a place where recreation comes naturally.”

All amenities at Stenungsbaden have seen great improvement in the last few years. 50 deluxe rooms have just been renovated, and another 79 rooms will go through the same change this season. All in all, the whole facility is in greater harmony which, according to Österström, makes a big difference to the visitor. “It creates a balance throughout the whole experience. Our lowest level is now much higher than it used to be – from the first impression when you visit our website to the final touch on your bespoke body treatment.”

Best spa in Sweden As return on the investments and proof that the hard work has paid off, the spa at Stenungsbaden, Bluewater Sports &amp; Health Club, was recently presented with a highly prestigious award: The Best Spa Hotel in Sweden, according to