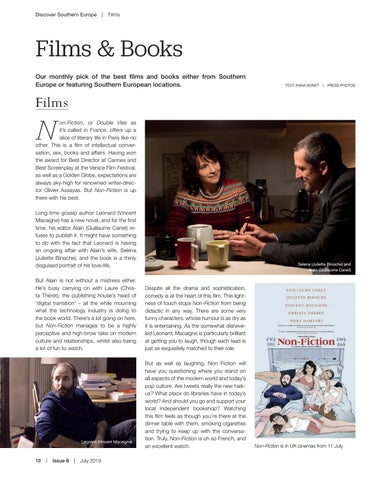 on-Fiction, or Double Vies as it’s called in France, offers up a slice of literary life in Paris like no other. This is a film of intellectual conversation, sex, books and affairs. Having won the award for Best Director at Cannes and Best Screenplay at the Venice Film Festival, as well as a Golden Globe, expectations are always sky-high for renowned writer-director Olivier Assayas. But Non-Fiction is up there with his best. Long-time gossip author Leonard (Vincent Macaigne) has a new novel, and for the first time, his editor Alain (Guillaume Canet) refuses to publish it. It might have something to do with the fact that Leonard is having an ongoing affair with Alain’s wife, Selena (Juliette Binoche), and the book is a thinly disguised portrait of his love-life. But Alain is not without a mistress either. He’s busy carrying on with Laure (Christa Théret), the publishing house’s head of ‘digital transition’ – all the while mourning what the technology industry is doing to the book world. There’s a lot going on here, but Non-Fiction manages to be a highly perceptive and high-brow take on modern culture and relationships, whilst also being a lot of fun to watch.

Despite all the drama and sophistication, comedy is at the heart of this film. This lightness of touch stops Non-Fiction from being didactic in any way. There are some very funny characters, whose humour is as dry as it is entertaining. As the somewhat disheveled Leonard, Macaigne is particularly brilliant at getting you to laugh, though each lead is just as exquisitely matched to their role. But as well as laughing, Non Fiction will have you questioning where you stand on all aspects of the modern world and today’s pop culture. Are tweets really the new haikus? What place do libraries have in today’s world? And should you go and support your local independent bookshop? Watching this film feels as though you’re there at the dinner table with them, smoking cigarettes and trying to keep up with the conversation. Truly, Non-Fiction is oh so French, and an excellent watch.

Non-Fiction is in UK cinemas from 11 July