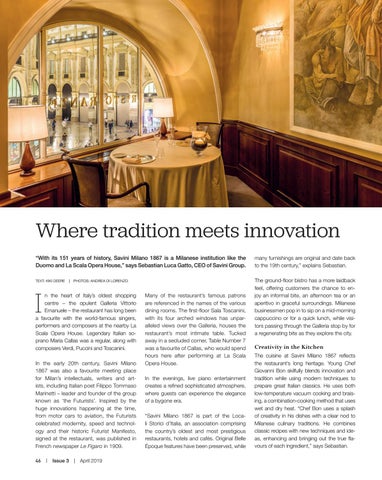 Where tradition meets innovation “With its 151 years of history, Savini Milano 1867 is a Milanese institution like the Duomo and La Scala Opera House,” says Sebastian Luca Gatto, CEO of Savini Group.

many furnishings are original and date back to the 19th century,” explains Sebastian.

The ground-floor bistro has a more laidback feel, offering customers the chance to enjoy an informal bite, an afternoon tea or an aperitivo in graceful surroundings. Milanese businessmen pop in to sip on a mid-morning cappuccino or for a quick lunch, while visitors passing through the Galleria stop by for a regenerating bite as they explore the city.

n the heart of Italy’s oldest shopping centre – the opulent Galleria Vittorio Emanuele – the restaurant has long been a favourite with the world-famous singers, performers and composers at the nearby La Scala Opera House. Legendary Italian soprano Maria Callas was a regular, along with composers Verdi, Puccini and Toscanini. In the early 20th century, Savini Milano 1867 was also a favourite meeting place for Milan’s intellectuals, writers and artists, including Italian poet Filippo Tommaso Marinetti – leader and founder of the group known as ‘the Futurists’. Inspired by the huge innovations happening at the time, from motor cars to aviation, the Futurists celebrated modernity, speed and technology and their historic Futurist Manifesto, signed at the restaurant, was published in French newspaper Le Figaro in 1909.

Many of the restaurant’s famous patrons are referenced in the names of the various dining rooms. The first-floor Sala Toscanini, with its four arched windows has unparalleled views over the Galleria, houses the restaurant’s most intimate table. Tucked away in a secluded corner, Table Number 7 was a favourite of Callas, who would spend hours here after performing at La Scala Opera House. In the evenings, live piano entertainment creates a refined sophisticated atmosphere, where guests can experience the elegance of a bygone era. “Savini Milano 1867 is part of the Locali Storici d’Italia, an association comprising the country’s oldest and most prestigious restaurants, hotels and cafés. Original Belle Époque features have been preserved, while

Creativity in the Kitchen The cuisine at Savini Milano 1867 reflects the restaurant’s long heritage. Young Chef Giovanni Bon skilfully blends innovation and tradition while using modern techniques to prepare great Italian classics. He uses both low-temperature vacuum cooking and braising, a combination-cooking method that uses wet and dry heat. “Chef Bon uses a splash of creativity in his dishes with a clear nod to Milanese culinary traditions. He combines classic recipes with new techniques and ideas, enhancing and bringing out the true flavours of each ingredient,” says Sebastian.