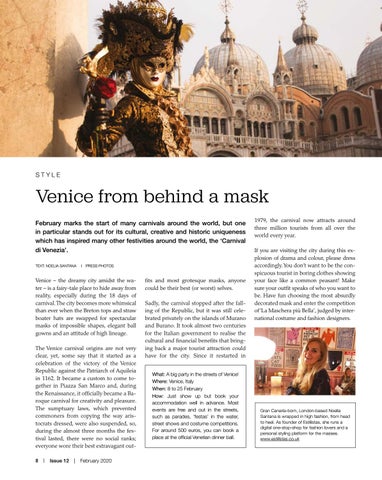 Venice from behind a mask February marks the start of many carnivals around the world, but one in particular stands out for its cultural, creative and historic uniqueness which has inspired many other festivities around the world, the ‘Carnival di Venezia’. TEXT: NOELIA SANTANA   I  PRESS PHOTOS

Venice – the dreamy city amidst the water – is a fairy-tale place to hide away from reality, especially during the 18 days of carnival. The city becomes more whimsical than ever when the Breton tops and straw boater hats are swapped for spectacular masks of impossible shapes, elegant ball gowns and an attitude of high lineage. The Venice carnival origins are not very clear, yet, some say that it started as a celebration of the victory of the Venice Republic against the Patriarch of Aquileia in 1162. It became a custom to come together in Piazza San Marco and, during the Renaissance, it officially became a Baroque carnival for creativity and pleasure. The sumptuary laws, which prevented commoners from copying the way aristocrats dressed, were also suspended, so, during the almost three months the festival lasted, there were no social ranks; everyone wore their best extravagant out8  |  Issue 12  |  February 2020

fits and most grotesque masks, anyone could be their best (or worst) selves. Sadly, the carnival stopped after the falling of the Republic, but it was still celebrated privately on the islands of Murano and Burano. It took almost two centuries for the Italian government to realise the cultural and financial benefits that bringing back a major tourist attraction could have for the city. Since it restarted in What: A big party in the streets of Venice! Where: Venice, Italy When: 8 to 25 February How: Just show up but book your accommodation well in advance. Most events are free and out in the streets, such as parades, ‘festas’ in the water, street shows and costume competitions. For around 500 euros, you can book a place at the official Venetian dinner ball.

1979, the carnival now attracts around three million tourists from all over the world every year. If you are visiting the city during this explosion of drama and colour, please dress accordingly. You don’t want to be the conspicuous tourist in boring clothes showing your face like a common peasant! Make sure your outfit speaks of who you want to be. Have fun choosing the most absurdly decorated mask and enter the competition of ‘La Maschera più Bella’, judged by international costume and fashion designers.

Gran Canaria-born, London-based Noelia Santana is wrapped in high fashion, from head to heel. As founder of Estilistas, she runs a digital one-stop-shop for fashion lovers and a personal styling platform for the masses. www.estilistas.co.uk