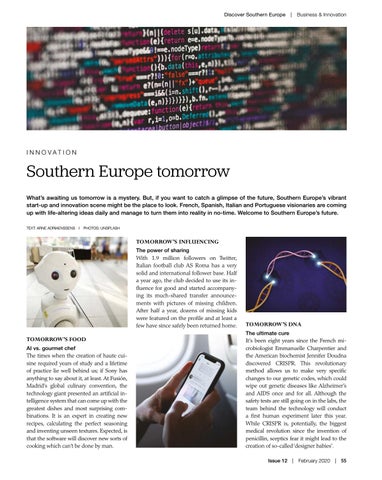 Southern Europe tomorrow What’s awaiting us tomorrow is a mystery. But, if you want to catch a glimpse of the future, Southern Europe’s vibrant start-up and innovation scene might be the place to look. French, Spanish, Italian and Portuguese visionaries are coming up with life-altering ideas daily and manage to turn them into reality in no-time. Welcome to Southern Europe’s future. TEXT: ARNE ADRIAENSSENS  I  PHOTOS: UNSPLASH

TOMORROW’S INFLUENCING The power of sharing

With 1.9 million followers on Twitter, Italian football club AS Roma has a very solid and international follower base. Half a year ago, the club decided to use its influence for good and started accompanying its much-shared transfer announcements with pictures of missing children. After half a year, dozens of missing kids were featured on the profile and at least a few have since safely been returned home.

The times when the creation of haute cuisine required years of study and a lifetime of practice lie well behind us; if Sony has anything to say about it, at least. At Fusión, Madrid’s global culinary convention, the technology giant presented an artificial intelligence system that can come up with the greatest dishes and most surprising combinations. It is an expert in creating new recipes, calculating the perfect seasoning and inventing unseen textures. Expected, is that the software will discover new sorts of cooking which can’t be done by man.

It’s been eight years since the French microbiologist Emmanuelle Charpentier and the American biochemist Jennifer Doudna discovered CRISPR. This revolutionary method allows us to make very specific changes to our genetic codes, which could wipe out genetic diseases like Alzheimer’s and AIDS once and for all. Although the safety tests are still going on in the labs, the team behind the technology will conduct a first human experiment later this year. While CRISPR is, potentially, the biggest medical revolution since the invention of penicillin, sceptics fear it might lead to the creation of so-called ‘designer babies’. Issue 12  |  February 2020  |  55