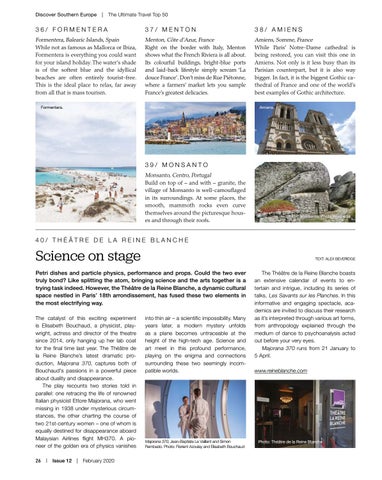 Formentera, Balearic Islands, Spain While not as famous as Mallorca or Ibiza, Formentera is everything you could want for your island holiday. The water’s shade is of the softest blue and the idyllical beaches are often entirely tourist-free. This is the ideal place to relax, far away from all that is mass tourism.

Amiens, Somme, France While Paris’ Notre-Dame cathedral is being restored, you can visit this one in Amiens. Not only is it less busy than its Parisian counterpart, but it is also way bigger. In fact, it is the biggest Gothic cathedral of France and one of the world’s best examples of Gothic architecture.

39/ MONSANTO Monsanto, Centro, Portugal Build on top of – and with – granite, the village of Monsanto is well-camouflaged in its surroundings. At some places, the smooth, mammoth rocks even curve themselves around the picturesque houses and through their roofs.

Petri dishes and particle physics, performance and props. Could the two ever truly bond? Like splitting the atom, bringing science and the arts together is a trying task indeed. However, the Théâtre de la Reine Blanche, a dynamic cultural space nestled in Paris’ 18th arrondissement, has fused these two elements in the most electrifying way. The catalyst of this exciting experiment is Elisabeth Bouchaud, a physicist, playwright, actress and director of the theatre since 2014, only hanging up her lab coat for the final time last year. The Théâtre de la Reine Blanche’s latest dramatic production, Majorana 370, captures both of Bouchaud&#39;s passions in a powerful piece about duality and disappearance. The play recounts two stories told in parallel: one retracing the life of renowned Italian physicist Ettore Majorana, who went missing in 1938 under mysterious circumstances, the other charting the course of two 21st-century women – one of whom is equally destined for disappearance aboard Malaysian Airlines flight MH370. A pioneer of the golden era of physics vanishes 26  |  Issue 12  |  February 2020

into thin air – a scientific impossibility. Many years later, a modern mystery unfolds as a plane becomes untraceable at the height of the high-tech age. Science and art meet in this profound performance, playing on the enigma and connections surrounding these two seemingly incompatible worlds.

The Théâtre de la Reine Blanche boasts an extensive calendar of events to entertain and intrigue, including its series of talks, Les Savants sur les Planches. In this informative and engaging spectacle, academics are invited to discuss their research as it’s interpreted through various art forms, from anthropology explained through the medium of dance to psychoanalysis acted out before your very eyes. Majorana 370 runs from 21 January to 5 April. www.reineblanche.com