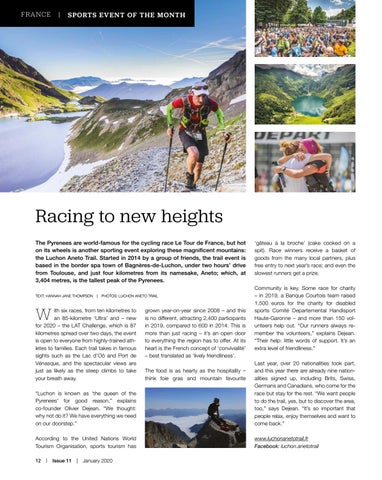 FRANCE   |   SPORTS EVENT OF THE MONTH

Racing to new heights The Pyrenees are world-famous for the cycling race Le Tour de France, but hot on its wheels is another sporting event exploring these magnificent mountains: the Luchon Aneto Trail. Started in 2014 by a group of friends, the trail event is based in the border spa town of Bagnères-de-Luchon, under two hours’ drive from Toulouse, and just four kilometres from its namesake, Aneto; which, at 3,404 metres, is the tallest peak of the Pyrenees. TEXT: HANNAH JANE THOMPSON  |  PHOTOS: LUCHON ANETO TRAIL

ith six races, from ten kilometres to an 85-kilometre ‘Ultra’ and – new for 2020 – the LAT Challenge, which is 87 kilometres spread over two days, the event is open to everyone from highly-trained athletes to families. Each trail takes in famous sights such as the Lac d’Oȏ and Port de Vénasque, and the spectacular views are just as likely as the steep climbs to take your breath away.

grown year-on-year since 2008 – and this is no different, attracting 2,400 participants in 2019, compared to 600 in 2014. This is more than just racing – it’s an open door to everything the region has to offer. At its heart is the French concept of ‘convivialité’ – best translated as ‘lively friendliness’.

‘gâteau à la broche’ (cake cooked on a spit). Race winners receive a basket of goods from the many local partners, plus free entry to next year’s race; and even the slowest runners get a prize. Community is key. Some race for charity – in 2019, a Banque Courtois team raised 1,500 euros for the charity for disabled sports Comité Departemental Handisport Haute-Garonne – and more than 150 volunteers help out. “Our runners always remember the volunteers,” explains Dejean. “Their help: little words of support. It’s an extra level of friendliness.”

“Luchon is known as ‘the queen of the Pyrenees’ for good reason,” explains co-founder Olivier Dejean. “We thought: why not do it? We have everything we need on our doorstep.”

Last year, over 20 nationalities took part, and this year there are already nine nationalities signed up, including Brits, Swiss, Germans and Canadians, who come for the race but stay for the rest. “We want people to do the trail, yes, but to discover the area, too,” says Dejean. “It’s so important that people relax, enjoy themselves and want to come back.”

According to the United Nations World Tourism Organisation, sports tourism has