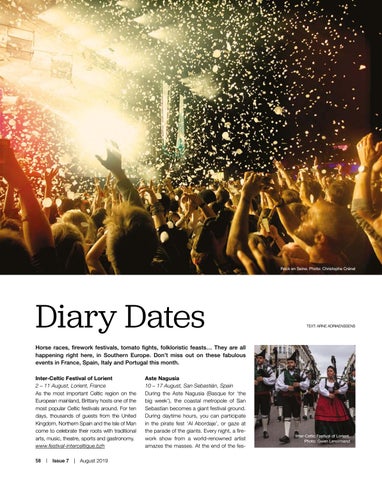 Horse races, firework festivals, tomato fights, folkloristic feasts… They are all happening right here, in Southern Europe. Don’t miss out on these fabulous events in France, Spain, Italy and Portugal this month. Inter-Celtic Festival of Lorient 2 – 11 August, Lorient, France As the most important Celtic region on the European mainland, Brittany hosts one of the most popular Celtic festivals around. For ten days, thousands of guests from the United Kingdom, Northern Spain and the Isle of Man come to celebrate their roots with traditional arts, music, theatre, sports and gastronomy. www.festival-interceltique.bzh 58  |  Issue 7  |  August 2019

Aste Nagusia 10 – 17 August, San Sebastián, Spain During the Aste Nagusia (Basque for ‘the big week’), the coastal metropole of San Sebastian becomes a giant festival ground. During daytime hours, you can participate in the pirate fest ‘Al Abordaje’, or gaze at the parade of the giants. Every night, a firework show from a world-renowned artist amazes the masses. At the end of the fes-