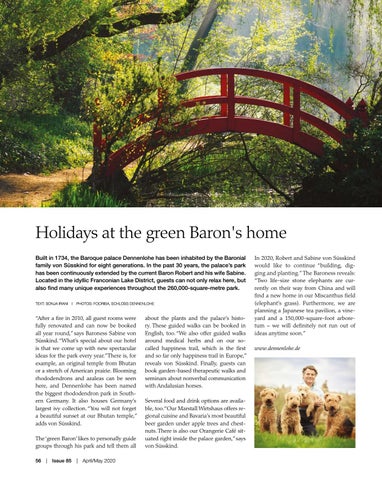 Holidays at the green Baron's home Built in 1734, the Baroque palace Dennenlohe has been inhabited by the Baronial family von Süsskind for eight generations. In the past 30 years, the palace’s park has been continuously extended by the current Baron Robert and his wife Sabine. Located in the idyllic Franconian Lake District, guests can not only relax here, but also find many unique experiences throughout the 260,000-square-metre park. TEXT: SONJA IRANI  I  PHOTOS: FOCRIBA, SCHLOSS DENNENLOHE

“After a fire in 2010, all guest rooms were fully renovated and can now be booked all year round,” says Baroness Sabine von Süsskind. “What’s special about our hotel is that we come up with new spectacular ideas for the park every year.”There is, for example, an original temple from Bhutan or a stretch of American prairie. Blooming rhododendrons and azaleas can be seen here, and Dennenlohe has been named the biggest rhododendron park in Southern Germany. It also houses Germany’s largest ivy collection. “You will not forget a beautiful sunset at our Bhutan temple,” adds von Süsskind. The ‘green Baron’ likes to personally guide groups through his park and tell them all 56  |  Issue 85  |  April/May 2020

about the plants and the palace’s history. These guided walks can be booked in English, too. “We also offer guided walks around medical herbs and on our socalled happiness trail, which is the first and so far only happiness trail in Europe,” reveals von Süsskind. Finally, guests can book garden-based therapeutic walks and seminars about nonverbal communication with Andalusian horses. Several food and drink options are available, too.“Our Marstall Wirtshaus offers regional cuisine and Bavaria’s most beautiful beer garden under apple trees and chestnuts. There is also our Orangerie Café situated right inside the palace garden,” says von Süsskind.

In 2020, Robert and Sabine von Süsskind would like to continue “building, digging and planting.” The Baroness reveals: “Two life-size stone elephants are currently on their way from China and will find a new home in our Miscanthus field (elephant’s grass). Furthermore, we are planning a Japanese tea pavilion, a vineyard and a 150,000-square-foot arboretum – we will definitely not run out of ideas anytime soon.” www.dennenlohe.de