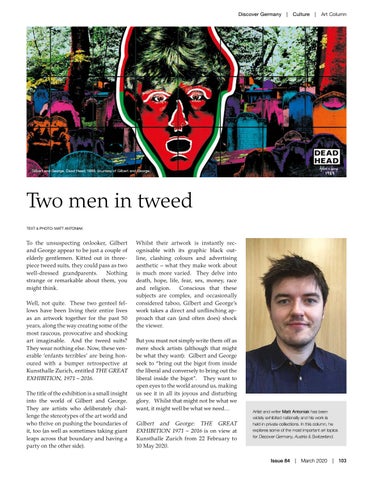 To the unsuspecting onlooker, Gilbert and George appear to be just a couple of elderly gentlemen. Kitted out in threepiece tweed suits, they could pass as two well-dressed grandparents. Nothing strange or remarkable about them, you might think. Well, not quite. These two genteel fellows have been living their entire lives as an artwork together for the past 50 years, along the way creating some of the most raucous, provocative and shocking art imaginable. And the tweed suits? They wear nothing else. Now, these venerable ‘enfants terribles’ are being honoured with a bumper retrospective at Kunsthalle Zurich, entitled THE GREAT EXHIBITION, 1971 – 2016. The title of the exhibition is a small insight into the world of Gilbert and George. They are artists who deliberately challenge the stereotypes of the art world and who thrive on pushing the boundaries of it, too (as well as sometimes taking giant leaps across that boundary and having a party on the other side).

Whilst their artwork is instantly recognisable with its graphic black outline, clashing colours and advertising aesthetic – what they make work about is much more varied. They delve into death, hope, life, fear, sex, money, race and religion. Conscious that these subjects are complex, and occasionally considered taboo, Gilbert and George’s work takes a direct and unflinching approach that can (and often does) shock the viewer. But you must not simply write them off as mere shock artists (although that might be what they want): Gilbert and George seek to “bring out the bigot from inside the liberal and conversely to bring out the liberal inside the bigot”. They want to open eyes to the world around us, making us see it in all its joyous and disturbing glory. Whilst that might not be what we want, it might well be what we need…

Artist and writer Matt Antoniak has been widely exhibited nationally and his work is held in private collections. In this column, he explores some of the most important art topics for Discover Germany, Austria &amp; Switzerland.

The March issue of Discover Germany, Austria & Switzerland features numerous inspiring spring topics, such as the top ten garden highlights of 2020. Other topics covered are interviews with the actress Annika Ernst, as well as the band MiA., who are back with their new album. Furthermore, we put special emphasis on the annual Engadin Skimarathon, top spa destinations, things to do and see in Hamburg, great architects, and much more.