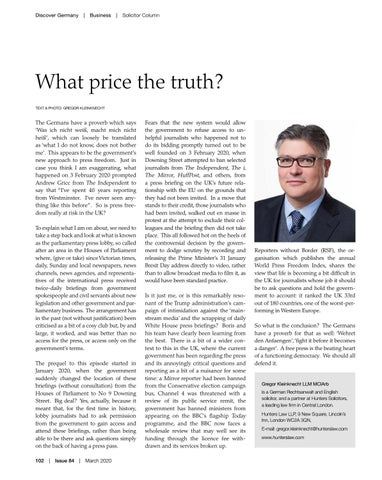 The Germans have a proverb which says ‘Was ich nicht weiß, macht mich nicht heiß’, which can loosely be translated as ‘what I do not know, does not bother me’. This appears to be the government’s new approach to press freedom. Just in case you think I am exaggerating, what happened on 3 February 2020 prompted Andrew Gricc from The Independent to say that “I’ve spent 40 years reporting from Westminster. I’ve never seen anything like this before”. So is press freedom really at risk in the UK? To explain what I am on about, we need to take a step back and look at what is known as the parliamentary press lobby, so called after an area in the Houses of Parliament where, (give or take) since Victorian times, daily, Sunday and local newspapers, news channels, news agencies, and representatives of the international press received twice-daily briefings from government spokespeople and civil servants about new legislation and other government and parliamentary business. The arrangement has in the past (not without justification) been criticised as a bit of a cosy club but, by and large, it worked, and was better than no access for the press, or access only on the government’s terms. The prequel to this episode started in January 2020, when the government suddenly changed the location of these briefings (without consultation) from the Houses of Parliament to No 9 Downing Street. Big deal? Yes, actually, because it meant that, for the first time in history, lobby journalists had to ask permission from the government to gain access and attend these briefings, rather than being able to be there and ask questions simply on the back of having a press pass. 102  |  Issue 84  |  March 2020

Fears that the new system would allow the government to refuse access to unhelpful journalists who happened not to do its bidding promptly turned out to be well founded on 3 February 2020, when Downing Street attempted to ban selected journalists from The Independent, The i, The Mirror, HuffPost, and others, from a press briefing on the UK’s future relationship with the EU on the grounds that they had not been invited. In a move that stands to their credit, those journalists who had been invited, walked out en masse in protest at the attempt to exclude their colleagues and the briefing then did not take place. This all followed hot on the heels of the controversial decision by the government to dodge scrutiny by recording and releasing the Prime Minister’s 31 January Brexit Day address directly to video, rather than to allow broadcast media to film it, as would have been standard practice. Is it just me, or is this remarkably resonant of the Trump administration’s campaign of intimidation against the ‘mainstream media’ and the scrapping of daily White House press briefings? Boris and his team have clearly been learning from the best. There is a bit of a wider context to this in the UK, where the current government has been regarding the press and its annoyingly critical questions and reporting as a bit of a nuisance for some time: a Mirror reporter had been banned from the Conservative election campaign bus, Channel 4 was threatened with a review of its public service remit, the government has banned ministers from appearing on the BBC’s flagship Today programme, and the BBC now faces a wholesale review that may well see its funding through the licence fee withdrawn and its services broken up.

Reporters without Border (RSF), the organisation which publishes the annual World Press Freedom Index, shares the view that life is becoming a bit difficult in the UK for journalists whose job it should be to ask questions and hold the government to account: it ranked the UK 33rd out of 180 countries, one of the worst-performing in Western Europe. So what is the conclusion? The Germans have a proverb for that as well: ‘Wehret den Anfaengen’, ‘fight it before it becomes a danger’. A free press is the beating heart of a functioning democracy. We should all defend it. Gregor Kleinknecht LLM MCIArb is a German Rechtsanwalt and English solicitor, and a partner at Hunters Solicitors, a leading law firm in Central London. Hunters Law LLP, 9 New Square, Lincoln’s Inn, London WC2A 3QN, E-mail: gregor.kleinknecht@hunterslaw.com www.hunterslaw.com