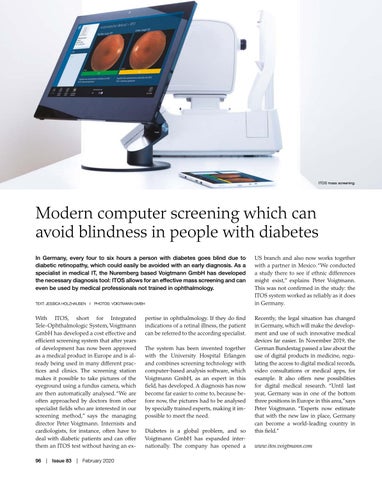 Modern computer screening which can avoid blindness in people with diabetes In Germany, every four to six hours a person with diabetes goes blind due to diabetic retinopathy, which could easily be avoided with an early diagnosis. As a specialist in medical IT, the Nuremberg based Voigtmann GmbH has developed the necessary diagnosis tool: ITOS allows for an effective mass screening and can even be used by medical professionals not trained in ophthalmology. TEXT: JESSICA HOLZHAUSEN  I  PHOTOS: VOIGTMANN GMBH

With ITOS, short for Integrated Tele-Ophthalmologic System, Voigtmann GmbH has developed a cost effective and efficient screening system that after years of development has now been approved as a medical product in Europe and is already being used in many different practices and clinics. The screening station makes it possible to take pictures of the eyeground using a fundus camera, which are then automatically analysed. “We are often approached by doctors from other specialist fields who are interested in our screening method,” says the managing director Peter Voigtmann. Internists and cardiologists, for instance, often have to deal with diabetic patients and can offer them an ITOS test without having an ex96  |  Issue 83  |  February 2020

pertise in ophthalmology. If they do find indications of a retinal illness, the patient can be referred to the according specialist. The system has been invented together with the University Hospital Erlangen and combines screening technology with computer-based analysis software, which Voigtmann GmbH, as an expert in this field, has developed. A diagnosis has now become far easier to come to, because before now, the pictures had to be analysed by specially trained experts, making it impossible to meet the need. Diabetes is a global problem, and so Voigtmann GmbH has expanded internationally. The company has opened a

US branch and also now works together with a partner in Mexico. “We conducted a study there to see if ethnic differences might exist,” explains Peter Voigtmann. This was not confirmed in the study: the ITOS system worked as reliably as it does in Germany. Recently, the legal situation has changed in Germany, which will make the development and use of such innovative medical devices far easier. In November 2019, the German Bundestag passed a law about the use of digital products in medicine, regulating the access to digital medical records, video consultations or medical apps, for example. It also offers new possibilities for digital medical research. “Until last year, Germany was in one of the bottom three positions in Europe in this area,”says Peter Voigtmann. “Experts now estimate that with the new law in place, Germany can become a world-leading country in this field.” www.itos.voigtmann.com