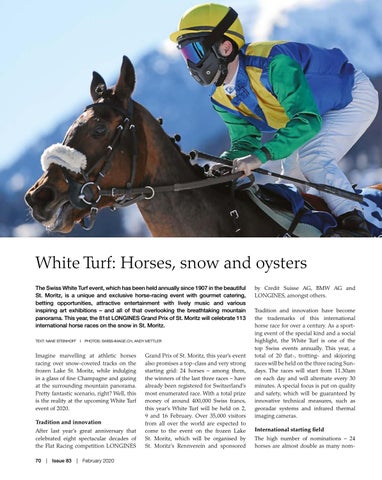 White Turf: Horses, snow and oysters The Swiss White Turf event, which has been held annually since 1907 in the beautiful St. Moritz, is a unique and exclusive horse-racing event with gourmet catering, betting opportunities, attractive entertainment with lively music and various inspiring art exhibitions – and all of that overlooking the breathtaking mountain panorama. This year, the 81st LONGINES Grand Prix of St. Moritz will celebrate 113 international horse races on the snow in St. Moritz. TEXT: NANE STEINHOFF  I  PHOTOS: SWISS-IMAGE.CH, ANDY METTLER

Imagine marvelling at athletic horses racing over snow-covered tracks on the frozen Lake St. Moritz, while indulging in a glass of fine Champagne and gazing at the surrounding mountain panorama. Pretty fantastic scenario, right? Well, this is the reality at the upcoming White Turf event of 2020. Tradition and innovation After last year’s great anniversary that celebrated eight spectacular decades of the Flat Racing competition LONGINES 70  |  Issue 83  |  February 2020

Grand Prix of St. Moritz, this year’s event also promises a top-class and very strong starting grid: 24 horses – among them, the winners of the last three races – have already been registered for Switzerland’s most enumerated race. With a total prize money of around 400,000 Swiss francs, this year’s White Turf will be held on 2, 9 and 16 February. Over 35,000 visitors from all over the world are expected to come to the event on the frozen Lake St. Moritz, which will be organised by St. Moritz’s Rennverein and sponsored

by Credit Suisse AG, BMW AG and LONGINES, amongst others. Tradition and innovation have become the trademarks of this international horse race for over a century. As a sporting event of the special kind and a social highlight, the White Turf is one of the top Swiss events annually. This year, a total of 20 flat-, trotting- and skijoring races will be held on the three racing Sundays. The races will start from 11.30am on each day and will alternate every 30 minutes. A special focus is put on quality and safety, which will be guaranteed by innovative technical measures, such as georadar systems and infrared thermal imaging cameras. International starting field The high number of nominations – 24 horses are almost double as many nom-