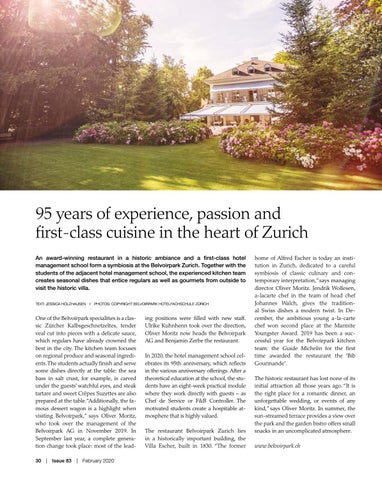 95 years of experience, passion and first-class cuisine in the heart of Zurich An award-winning restaurant in a historic ambiance and a first-class hotel management school form a symbiosis at the Belvoirpark Zurich. Together with the students of the adjacent hotel management school, the experienced kitchen team creates seasonal dishes that entice regulars as well as gourmets from outside to visit the historic villa. TEXT: JESSICA HOLZHAUSEN  I  PHOTOS: COPYRIGHT BELVOIRPARK HOTELFACHSCHULE ZÜRICH

One of the Belvoirpark specialities is a classic Zürcher Kalbsgeschnetzeltes, tender veal cut into pieces with a delicate sauce, which regulars have already crowned the best in the city. The kitchen team focuses on regional produce and seasonal ingredients. The students actually finish and serve some dishes directly at the table: the sea bass in salt crust, for example, is carved under the guests’ watchful eyes, and steak tartare and sweet Crêpes Suzettes are also prepared at the table.“Additionally, the famous dessert wagon is a highlight when visiting Belvoirpark,” says Oliver Moritz, who took over the management of the Belvoirpark AG in November 2019. In September last year, a complete generation change took place: most of the lead30  |  Issue 83  |  February 2020

ing positions were filled with new staff. Ulrike Kuhnhenn took over the direction, Oliver Moritz now heads the Belvoirpark AG and Benjamin Zerbe the restaurant. In 2020, the hotel management school celebrates its 95th anniversary, which reflects in the various anniversary offerings. After a theoretical education at the school, the students have an eight-week practical module where they work directly with guests – as Chef de Service or F&amp;B Controller. The motivated students create a hospitable atmosphere that is highly valued. The restaurant Belvoirpark Zurich lies in a historically important building, the Villa Escher, built in 1830. “The former

home of Alfred Escher is today an institution in Zurich, dedicated to a careful symbiosis of classic culinary and contemporary interpretation,” says managing director Oliver Moritz. Jendrik Wollesen, a-lacarte chef in the team of head chef Johannes Walch, gives the traditional Swiss dishes a modern twist. In December, the ambitious young a-la-carte chef won second place at the Marmite Youngster Award. 2019 has been a successful year for the Belvoirpark kitchen team: the Guide Michelin for the first time awarded the restaurant the ‘Bib Gourmande’. The historic restaurant has lost none of its initial attraction all those years ago. “It is the right place for a romantic dinner, an unforgettable wedding, or events of any kind,” says Oliver Moritz. In summer, the sun-streamed terrace provides a view over the park and the garden bistro offers small snacks in an uncomplicated atmosphere. www.belvoirpark.ch