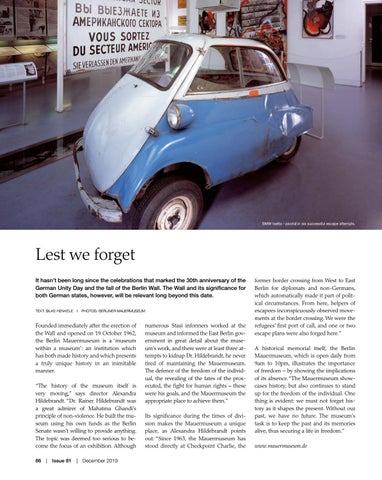 Lest we forget It hasn’t been long since the celebrations that marked the 30th anniversary of the German Unity Day and the fall of the Berlin Wall. The Wall and its significance for both German states, however, will be relevant long beyond this date. TEXT: SILKE HENKELE  I  PHOTOS: BERLINER MAUERMUSEUM

Founded immediately after the erection of the Wall and opened on 19 October 1962, the Berlin Mauermuseum is a ‘museum within a museum’: an institution which has both made history and which presents a truly unique history in an inimitable manner. “The history of the museum itself is very moving,” says director Alexandra Hildebrandt. “Dr. Rainer Hildebrandt was a great admirer of Mahatma Ghandi’s principle of non-violence. He built the museum using his own funds as the Berlin Senate wasn’t willing to provide anything. The topic was deemed too serious to become the focus of an exhibition. Although 86  |  Issue 81  |  December 2019

numerous Stasi informers worked at the museum and informed the East Berlin government in great detail about the museum’s work, and there were at least three attempts to kidnap Dr. Hildebrandt, he never tired of maintaining the Mauermuseum. The defence of the freedom of the individual, the revealing of the fates of the prosecuted, the fight for human rights – these were his goals, and the Mauermuseum the appropriate place to achieve them.” Its significance during the times of division makes the Mauermuseum a unique place, as Alexandra Hildebrandt points out: “Since 1963, the Mauermuseum has stood directly at Checkpoint Charlie, the

former border crossing from West to East Berlin for diplomats and non-Germans, which automatically made it part of political circumstances. From here, helpers of escapees inconspicuously observed movements at the border crossing. We were the refugees’ first port of call, and one or two escape plans were also forged here.” A historical memorial itself, the Berlin Mauermuseum, which is open daily from 9am to 10pm, illustrates the importance of freedom – by showing the implications of its absence. “The Mauermuseum showcases history, but also continues to stand up for the freedom of the individual. One thing is evident: we must not forget history as it shapes the present. Without our past, we have no future. The museum’s task is to keep the past and its memories alive, thus securing a life in freedom.” www.mauermuseum.de