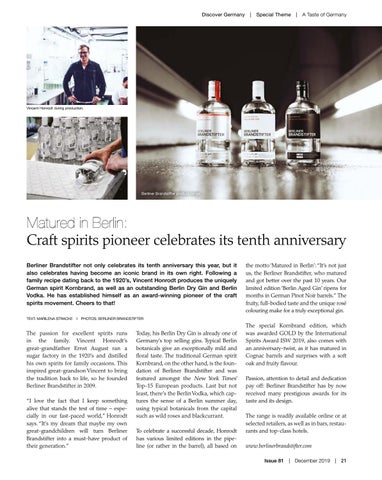 Matured in Berlin: Craft spirits pioneer celebrates its tenth anniversary Berliner Brandstifter not only celebrates its tenth anniversary this year, but it also celebrates having become an iconic brand in its own right. Following a family recipe dating back to the 1920’s, Vincent Honrodt produces the uniquely German spirit Kornbrand, as well as an outstanding Berlin Dry Gin and Berlin Vodka. He has established himself as an award-winning pioneer of the craft spirits movement. Cheers to that!

the motto ‘Matured in Berlin’: “It’s not just us, the Berliner Brandstifter, who matured and got better over the past 10 years. Our limited edition ‘Berlin Aged Gin’ ripens for months in German Pinot Noir barrels.” The fruity, full-bodied taste and the unique rosé colouring make for a truly exceptional gin.

The passion for excellent spirits runs in the family. Vincent Honrodt’s great-grandfather Ernst August ran a sugar factory in the 1920’s and distilled his own spirits for family occasions. This inspired great-grandson Vincent to bring the tradition back to life, so he founded Berliner Brandstifter in 2009. “I love the fact that I keep something alive that stands the test of time – especially in our fast-paced world,” Honrodt says. “It’s my dream that maybe my own great-grandchildren will turn Berliner Brandstifter into a must-have product of their generation.”

Today, his Berlin Dry Gin is already one of Germany’s top selling gins. Typical Berlin botanicals give an exceptionally mild and floral taste. The traditional German spirit Kornbrand, on the other hand, is the foundation of Berliner Brandstifter and was featured amongst the New York Times’ Top-15 European products. Last but not least, there’s the Berlin Vodka, which captures the sense of a Berlin summer day, using typical botanicals from the capital such as wild roses and blackcurrant. To celebrate a successful decade, Honrodt has various limited editions in the pipeline (or rather in the barrel), all based on

The special Kornbrand edition, which was awarded GOLD by the International Spirits Award ISW 2019, also comes with an anniversary-twist, as it has matured in Cognac barrels and surprises with a soft oak and fruity flavour. Passion, attention to detail and dedication pay off: Berliner Brandstifter has by now received many prestigious awards for its taste and its design. The range is readily available online or at selected retailers, as well as in bars, restaurants and top-class hotels. www.berlinerbrandstifter.com Issue 81  |  December 2019  |  21