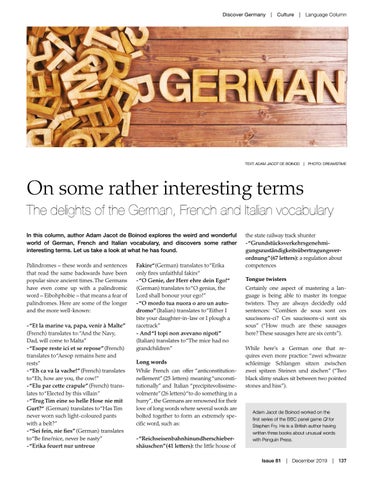 Fakire“(German) translates to “Erika only fires unfaithful fakirs“ - “O Genie, der Herr ehre dein Ego!“ (German) translates to “O genius, the Lord shall honour your ego!” - “O mordo tua nuora o aro un autodromo” (Italian) translates to “Either I bite your daughter-in-law or I plough a racetrack” - And “I topi non avevano nipoti” (Italian) translates to “The mice had no grandchildren” Long words While French can offer “anticonstitutionnellement” (25 letters) meaning “unconstitutionally” and Italian “precipitevolissimevolmente”(26 letters)“to do something in a hurry”, the Germans are renowned for their love of long words where several words are bolted together to form an extremely specific word, such as: - “Reichseisenbahnhinundherschiebershäuschen” (41 letters): the little house of