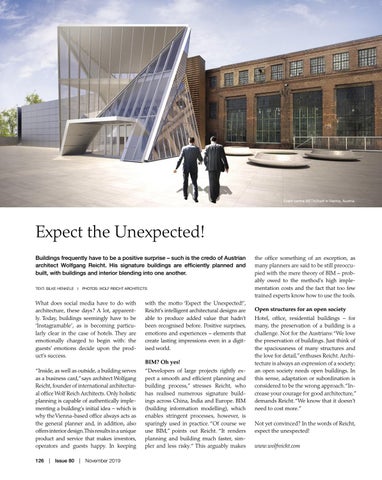 Expect the Unexpected! Buildings frequently have to be a positive surprise – such is the credo of Austrian architect Wolfgang Reicht. His signature buildings are efficiently planned and built, with buildings and interior blending into one another. TEXT: SILKE HENKELE  I  PHOTOS: WOLF REICHT ARCHITECTS

What does social media have to do with architecture, these days? A lot, apparently. Today, buildings seemingly have to be ‘Instagramable’, as is becoming particularly clear in the case of hotels. They are emotionally charged to begin with: the guests’ emotions decide upon the product’s success.

with the motto ‘Expect the Unexpected!’, Reicht’s intelligent architectural designs are able to produce added value that hadn’t been recognised before. Positive surprises, emotions and experiences – elements that create lasting impressions even in a digitised world.

“Inside, as well as outside, a building serves as a business card,” says architect Wolfgang Reicht, founder of international architectural office Wolf Reich Architects. Only holistic planning is capable of authentically implementing a building’s initial idea – which is why the Vienna-based office always acts as the general planner and, in addition, also offers interior design.This results in a unique product and service that makes investors, operators and guests happy. In keeping

“Developers of large projects rightly expect a smooth and efficient planning and building process,” stresses Reicht, who has realised numerous signature buildings across China, India and Europe. BIM (building information modelling), which enables stringent processes, however, is sparingly used in practice. “Of course we use BIM,” points out Reicht. “It renders planning and building much faster, simpler and less risky.“ This arguably makes

the office something of an exception, as many planners are said to be still preoccupied with the mere theory of BIM – probably owed to the method’s high implementation costs and the fact that too few trained experts know how to use the tools. Open structures for an open society Hotel, office, residential buildings – for many, the preservation of a building is a challenge. Not for the Austrians: “We love the preservation of buildings. Just think of the spaciousness of many structures and the love for detail,”enthuses Reicht. Architecture is always an expression of a society; an open society needs open buildings. In this sense, adaptation or subordination is considered to be the wrong approach.“Increase your courage for good architecture,” demands Reicht. “We know that it doesn’t need to cost more.” Not yet convinced? In the words of Reicht, expect the unexpected! www.wolfreicht.com

Discover Germany, Austria & Switzerland’s November issue gives some tips on how to embrace winter to the fullest. The magazine therefore looks at men’s fashion staples for the cold season, the top-ten things to do in the DACH region this winter, must-visit Christmas markets and much more. Other topics covered are top hotels and interviews with the Austrian actor Michael Ostrowski and German singer Lena Meyer-Landrut, amongst other things.