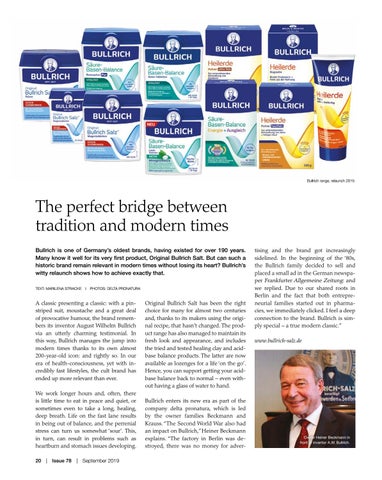 The perfect bridge between tradition and modern times Bullrich is one of Germany’s oldest brands, having existed for over 190 years. Many know it well for its very first product, Original Bullrich Salt. But can such a historic brand remain relevant in modern times without losing its heart? Bullrich’s witty relaunch shows how to achieve exactly that. TEXT: MARILENA STRACKE  I  PHOTOS: DELTA PRONATURA

A classic presenting a classic: with a pinstriped suit, moustache and a great deal of provocative humour, the brand remembers its inventor August Wilhelm Bullrich via an utterly charming testimonial. In this way, Bullrich manages the jump into modern times thanks to its own almost 200-year-old icon: and rightly so. In our era of health-consciousness, yet with incredibly fast lifestyles, the cult brand has ended up more relevant than ever. We work longer hours and, often, there is little time to eat in peace and quiet, or sometimes even to take a long, healing, deep breath. Life on the fast lane results in being out of balance, and the perrenial stress can turn us somewhat ‘sour’. This, in turn, can result in problems such as heartburn and stomach issues developing. 20  |  Issue 78  |  September 2019

Original Bullrich Salt has been the right choice for many for almost two centuries and, thanks to its makers using the original recipe, that hasn’t changed. The product range has also managed to maintain its fresh look and appearance, and includes the tried and tested healing clay and acidbase balance products. The latter are now available as lozenges for a life ‘on the go’. Hence, you can support getting your acidbase balance back to normal – even without having a glass of water to hand. Bullrich enters its new era as part of the company delta pronatura, which is led by the owner families Beckmann and Krauss. “The Second World War also had an impact on Bullrich,” Heiner Beckmann explains. “The factory in Berlin was destroyed, there was no money for adver-

tising and the brand got increasingly sidelined. In the beginning of the ‘80s, the Bullrich family decided to sell and placed a small ad in the German newspaper Frankfurter Allgemeine Zeitung: and we replied. Due to our shared roots in Berlin and the fact that both entrepreneurial families started out in pharmacies, we immediately clicked. I feel a deep connection to the brand. Bullrich is simply special – a true modern classic.” www.bullrich-salz.de