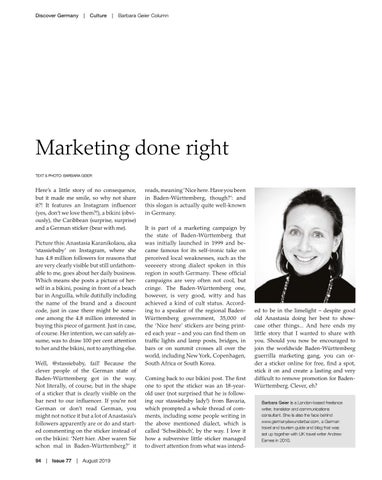 Here’s a little story of no consequence, but it made me smile, so why not share it?! It features an Instagram influencer (yes, don’t we love them?!), a bikini (obviously), the Caribbean (surprise, surprise) and a German sticker (bear with me). Picture this: Anastasia Karanikolaou, aka ‘stassiebaby’ on Instagram, where she has 4.8 million followers for reasons that are very clearly visible but still unfathomable to me, goes about her daily business. Which means she posts a picture of herself in a bikini, posing in front of a beach bar in Anguilla, while dutifully including the name of the brand and a discount code, just in case there might be someone among the 4.8 million interested in buying this piece of garment. Just in case, of course. Her intention, we can safely assume, was to draw 100 per cent attention to her and the bikini, not to anything else. Well, @stassiebaby, fail! Because the clever people of the German state of Baden-Württemberg got in the way. Not literally, of course, but in the shape of a sticker that is clearly visible on the bar next to our influencer. If you’re not German or don’t read German, you might not notice it but a lot of Anastasia’s followers apparently are or do and started commenting on the sticker instead of on the bikini: ‘Nett hier. Aber waren Sie schon mal in Baden-Württemberg?’ it 94  |  Issue 77  |  August 2019

reads, meaning ’Nice here. Have you been in Baden-Württemberg, though?’: and this slogan is actually quite well-known in Germany. It is part of a marketing campaign by the state of Baden-Württemberg that was initially launched in 1999 and became famous for its self-ironic take on perceived local weaknesses, such as the veeeeery strong dialect spoken in this region in south Germany. These official campaigns are very often not cool, but cringe. The Baden-Württemberg one, however, is very good, witty and has achieved a kind of cult status. According to a speaker of the regional BadenWürttemberg government, 35,000 of the ‘Nice here’ stickers are being printed each year – and you can find them on traffic lights and lamp posts, bridges, in bars or on summit crosses all over the world, including New York, Copenhagen, South Africa or South Korea. Coming back to our bikini post. The first one to spot the sticker was an 18-yearold user (not surprised that he is following our stassiebaby lady!) from Bavaria, which prompted a whole thread of comments, including some people writing in the above mentioned dialect, which is called ‘Schwäbisch’, by the way. I love it how a subversive little sticker managed to divert attention from what was intend-

ed to be in the limelight – despite good old Anastasia doing her best to showcase other things... And here ends my little story that I wanted to share with you. Should you now be encouraged to join the worldwide Baden-Württemberg guerrilla marketing gang, you can order a sticker online for free, find a spot, stick it on and create a lasting and very difficult to remove promotion for BadenWürttemberg. Clever, eh? Barbara Geier is a London-based freelance writer, translator and communications consultant. She is also the face behind www.germanyiswunderbar.com, a German travel and tourism guide and blog that was set up together with UK travel writer Andrew Eames in 2010.