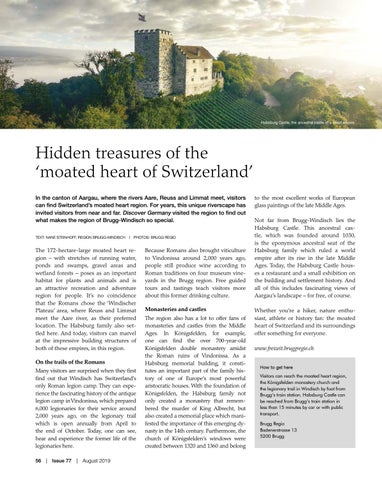 Habsburg Castle, the ancestral castle of a world empire.

Hidden treasures of the ‘moated heart of Switzerland’ In the canton of Aargau, where the rivers Aare, Reuss and Limmat meet, visitors can find Switzerland’s moated heart region. For years, this unique riverscape has invited visitors from near and far. Discover Germany visited the region to find out what makes the region of Brugg-Windisch so special. TEXT: NANE STEINHOFF, REGION BRUGG-WINDISCH  I  PHOTOS: BRUGG REGIO

The 172-hectare-large moated heart region – with stretches of running water, ponds and swamps, gravel areas and wetland forests – poses as an important habitat for plants and animals and is an attractive recreation and adventure region for people. It’s no coincidence that the Romans chose the ‘Windischer Plateau’ area, where Reuss and Limmat meet the Aare river, as their preferred location. The Habsburg family also settled here. And today, visitors can marvel at the impressive building structures of both of these empires, in this region. On the trails of the Romans Many visitors are surprised when they first find out that Windisch has Switzerland’s only Roman legion camp. They can experience the fascinating history of the antique legion camp in Vindonissa, which prepared 6,000 legionaries for their service around 2,000 years ago, on the legionary trail which is open annually from April to the end of October. Today, one can see, hear and experience the former life of the legionaries here. 56  |  Issue 77  |  August 2019

Because Romans also brought viticulture to Vindonissa around 2,000 years ago, people still produce wine according to Roman traditions on four museum vineyards in the Brugg region. Free guided tours and tastings teach visitors more about this former drinking culture. Monasteries and castles The region also has a lot to offer fans of monasteries and castles from the Middle Ages. In Königsfelden, for example, one can find the over 700-year-old Königsfelden double monastery amidst the Roman ruins of Vindonissa. As a Habsburg memorial building, it constitutes an important part of the family history of one of Europe’s most powerful aristocratic houses. With the foundation of Königsfelden, the Habsburg family not only created a monastery that remembered the murder of King Albrecht, but also created a memorial place which manifested the importance of this emerging dynasty in the 14th century. Furthermore, the church of Königsfelden’s windows were created between 1320 and 1360 and belong

to the most excellent works of European glass paintings of the late Middle Ages. Not far from Brugg-Windisch lies the Habsburg Castle. This ancestral castle, which was founded around 1030, is the eponymous ancestral seat of the Habsburg family which ruled a world empire after its rise in the late Middle Ages. Today, the Habsburg Castle houses a restaurant and a small exhibition on the building and settlement history. And all of this includes fascinating views of Aargau’s landscape – for free, of course. Whether you’re a hiker, nature enthusiast, athlete or history fan: the moated heart of Switzerland and its surroundings offer something for everyone. www.freizeit.bruggregio.ch How to get here Visitors can reach the moated heart region, the Königsfelden monastery church and the legionary trail in Windisch by foot from Brugg’s train station. Habsburg Castle can be reached from Brugg’s train station in less than 15 minutes by car or with public transport. Brugg Regio Badenerstrasse 13 5200 Brugg