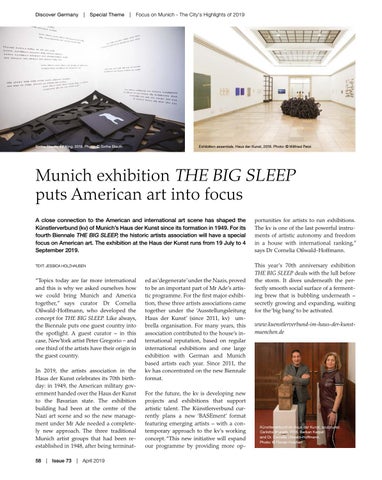 portunities for artists to run exhibitions. The kv is one of the last powerful instruments of artistic autonomy and freedom in a house with international ranking,” says Dr Cornelia Oßwald-Hoffmann.

This year&#39;s 70th anniversary exhibition THE BIG SLEEP deals with the lull before the storm. It dives underneath the perfectly smooth social surface of a fermenting brew that is bubbling underneath – secretly growing and expanding, waiting for the ‘big bang’ to be activated.

“Topics today are far more international and this is why we asked ourselves how we could bring Munich and America together,” says curator Dr Cornelia Oßwald-Hoffmann, who developed the concept for THE BIG SLEEP. Like always, the Biennale puts one guest country into the spotlight. A guest curator – in this case, New York artist Peter Gregorio – and one third of the artists have their origin in the guest country. In 2019, the artists association in the Haus der Kunst celebrates its 70th birthday: in 1949, the American military government handed over the Haus der Kunst to the Bavarian state. The exhibition building had been at the centre of the Nazi art scene and so the new management under Mr Ade needed a completely new approach. The three traditional Munich artist groups that had been reestablished in 1948, after being terminat58  |  Issue 73  |  April 2019

ed as ‘degenerate’ under the Nazis, proved to be an important part of Mr Ade’s artistic programme. For the first major exhibition, these three artists associations came together under the ‘Ausstellungsleitung Haus der Kunst’ (since 2011, kv) umbrella organisation. For many years, this association contributed to the house’s international reputation, based on regular international exhibitions and one large exhibition with German and Munich based artists each year. Since 2011, the kv has concentrated on the new Biennale format. For the future, the kv is developing new projects and exhibitions that support artistic talent. The Künstlerverbund currently plans a new ‘BASEment’ format featuring emerging artists – with a contemporary approach to the kv’s working concept. “This new initiative will expand our programme by providing more op-